Why Do Devizes to Westminster?

If anyone reading this has met someone who has completed the annual Devizes to Westminster canoe race, you're sure to know about it. Those of us who decide to ditch the rugby balls, hockey sticks and netball hoops never seem to stop mumbling on about this race, and how it 'defined me as a person', or was 'a life changing experience': you know the things we like to say. Every year, this race happens, and every year you hear about it in chapel, about how hard it is, how long it is (125 miles), and how hard everyone has had to work. But it's not until you go through it that you really understand what they mean. 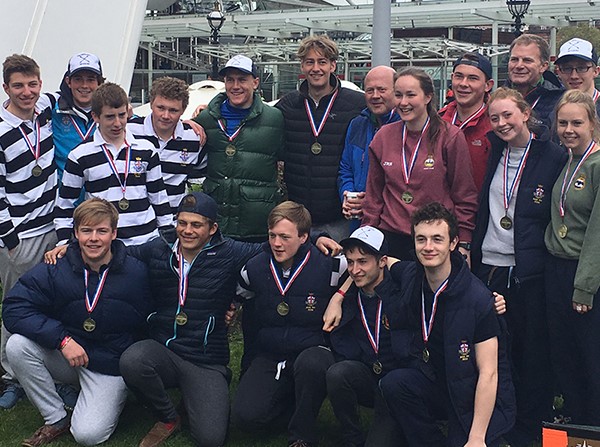 Some of RHS' previous competitors

I would first like to dispel some myths; no, you do not have to be a peak physical specimen to complete the race; I know that Will Kempster (Collingwood 2019), my partner in last year's iteration, would be happy for me to admit that we weren't exactly the slimmest or most muscular on the water, we didn't even come first in our class, despite there being a total of 2 boats in our race. What I am really saying here is that despite what people say, you do not have to be anything special. Of course, those who do the race like to think that we are, but, realistically, almost anyone is physically capable enough to complete the distance. It's the training, preparation, and mental battle that should really be celebrated.

The route taken by every DW paddler

The training for DW is no different to any other sport: start slow, build it up, and do it a lot. Many of the competitors from RHS each year have never set foot in a racing kayak before the Michaelmas term, earning the title 'Multi-sporter', owing to the fact that they often spend an equal amount of time in the water as on it. In fact, I still have never been able to stay upright in a Mirage, the most stable of all our racing boats, preferring the steady but slow nature of the Open Canadian canoe. This is where this games option differs from all the rest. Unless starting in year 7, most people who play rugby here have done it before, perhaps for years. Most people will have played hockey, or swam, or at least had some exposure to their chosen sport beforehand.

The C2 Class, as usual, a long way behind

The canoe team starts almost completely afresh each year: only two who raced last year remain. As the team has such a rapid turnover, it is not the race itself which is the genuine achievement, but the process of getting there. In no other sport is a team taken from complete ineptitude to the completion of the hardest event open to juniors in the country in less that 2 terms, sometimes even a single term. This is possible, in part, due to hard work and determination (you've heard it all before) of the paddlers, but the real effort comes from the staff and the support team. Without a coach, it would be impossible to train, and without a willing support team to shove 15 jelly babies in your mouth at a lock, the race itself would be impossible. Strangely, given that paddling is an individual or pairs sport, the DW team has the best atmosphere and camaraderie of any team you could hope for, due to the involvement of coaches, parents, paddlers and friends. 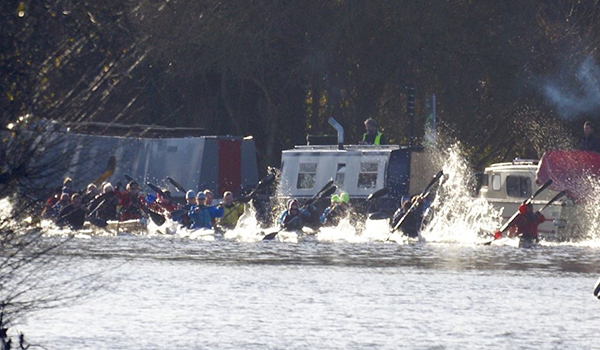 The Chaos of a canoe race...

This 'family' is one that, and I mean this genuinely, never dies out. There's something about that shared experience which brings you together. However, I'm not here to say to you 'Oooo, look at me, I'm so great because I did DW'. But I am here to tell you that I have not currently found myself in a situation that felt as great as passing under Westminster bridge last Easter. In this way, Canoeing is much more than a sport. Obviously, it's a useful mode of transport, but it has served for me as an escape; you forget everything else. I'm also not here to make you do DW, and I would say that it is not for everyone. But I will end with this... this silly little race means so much to the people that do it, not because it looks impressive, or to boast to their friends. We do it because the feeling is genuinely amazing. It brought me closer to the staff, especially Ms Polson and Mr Herbert, but also to my family: there's nothing better than seeing you dad, mum, or whoever is supporting you, standing at a portage clutching a box of warm Greggs sausage rolls.

This year, RHS is taking the team down to Wiltshire once more, under the wise teachings of WO1 Herbert, searching once more for that illusive Open Canadian Canoe prize. The current team is made up of 6 boats, 12 paddlers in total. This year, the students competing in the race are:

Finally, though the team is decided for this year, summer canoeing will be open next term, and I would encourage all those who even have the slightest inkling that they might want to do DW at some point in your RHS career to sign up. You will not regret it.