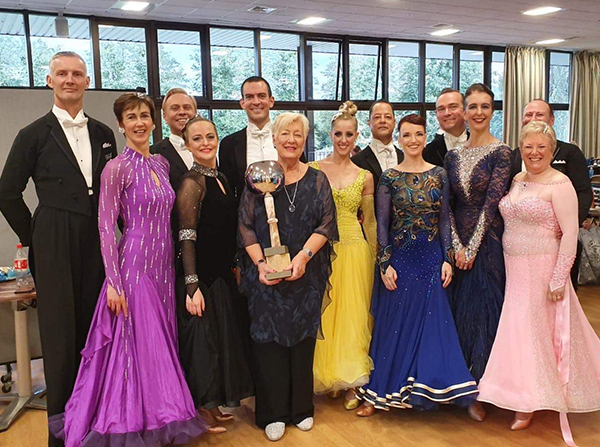 RHS teacher David Corby and his wife Jane, who also works at the school, are regular competitors in the world of ballroom dancing, competing in senior (over 35) categories all over the country.

As well as the major events held in places like the Winter Gardens in Blackpool and Bournemouth's International centre, regional competitions are held all over the country throughout the year.

Once a year, the Tylney Ballroom in Leatherhead hosts a ballroom dancing team match and invites a small contingency from Ireland and Denmark to compete. On Sunday 6 October, David and Jane were joined by fellow competitors to represent England at this 'friendly'. The competition involved two couples at a time from each team competing against each other over the five ballroom dances - waltz, tango, Viennese waltz, foxtrot and quickstep. Despite strong competition, the England team were victorious and took the cup.

The triumphant team are pictured with the trophy and Jeannie Ferris who helped organise the event.

The next big event for David and Jane will be the British Nationals held at the Winter Gardens in Blackpool at the end of November.