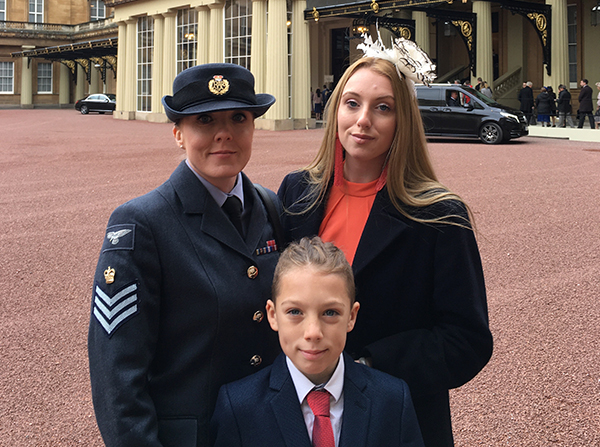 Flying visit to the Palace

Sgt. Ann Thomas is mum to Year 13 pupil Morgan Thomas and boasts an impressive 22-year military career recognised by a RAF Long Service award as well as Good Conduct medal. Morgan, along with her younger brother, recently accompanied her mother to Buckingham Palace to watch her being presented with a service MBE by Prince William.

A Royal Aeronautical Society professionally registered engineer, she has been an outstanding ambassador for female engineers. She took part in the 2017 Engineering Branch Conference, delivering a presentation to a 200-strong audience that included the likes of air marshals and commodores.

What's more, Ann has represented Great Britain in powerlifting since 2006 and is a multiple National, European and World Champion in the 63kg categories winning the world championship over 12 times in the past 13 years.

Committed to mentoring and coaching, she has supported people with disabilities and learning difficulties, notably she coached a young athlete who went on to win bronze medals at both London 2012 and Rio 2016 Paralympic Games.

She was nominated for the Women in Defence Awards in 2016 and 2018 in the inspirational category, shortlisted within the top 10 in 2016, and awarded an Air Officer Commanding's 22 Group Commendation for services to sport in 2016.

We would like to add our congratulations to Ann and her family for all her awards and achievements. Morgan is following in her mother's footsteps and is something of a powerlifting star herself.