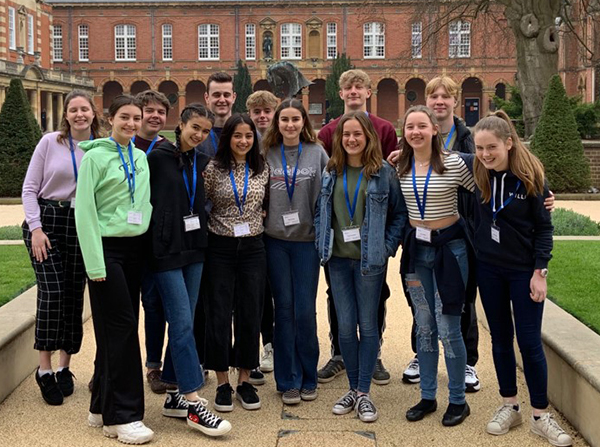 Every two years the Duet Group (the provider of the the schools' pianos) offer lucky musicians the opportunity to perform a concert at the stunning Royal Festival Hall in London. This year, thirteen musicians were selected to join 100+ musicians from other schools to perform two epic works; Stravinsky's Symphony of Psalms and Mahler's 5th Symphony.

Preparation was an intensive, but thrilling; three days of rehearsals at Wellington College before hot-footing it to the Royal Festival Hall. We understood the need for such full on training after being told there would be nearly three thousand people attending the concert.

On arrival at Wellington College, we were stunned at the grand building, and after a large meal, we were shown to our different boarding houses. It wasn't long before our housemistress introduced herself, and put us at complete ease. To the boys disgust, our girls' house had a range of games including Mario Kart; but it wasn't long before they found their way in front of our TV!

The first day consisted of six hours of rehearsals, with numerous breaks to the café in between! The initial look at Stravinsky's piece made us aware of how much of a challenge it was going to be; but the encouragement from our conductor, Ronald Corps, gave us lots of confidence. We looked at all three movements and finished with a stable grasp of the symphony. Evenings tended to involve a filling meal and free time within houses. A film was often playing in the theatre for anyone interested, but for some, sleep was what was needed in order to be bright and ready for the following day.

On the second day of rehearsals, we woke up to a huge full English breakfast, followed by sectional practise. Sopranos were in a separate room to other parts, and we focused on entrances. While singing the Symphony of Psalms, especially when alongside the orchestra, it was difficult to pitch the first note of phrases. This practise, however, enabled us to nail this, which built our confidence. In the afternoon, we joined forces with the orchestra; the sound we made collectively was extremely impressive and powerful.

The last day at the college involved some final rehearsals in the morning to finesse any last touches. The conductor reinforced the importance of us sopranos using a more aggressive tone, as this would compliment the orchestra nicely. For the rest of the day we were put on voice rest to ensure we were in good form for the performance the next day.

After an early wake up we set off for South Bank London, and after a couple of hours we arrived at the Royal Festival Hall. We were all assigned a dressing room; the big lights and fashionable mirrors soon made us realise that this was going to be a grand performance. In the morning we were allowed to visit Tate Modern for an hour, and to wander up South Bank. As the afternoon approached we got changed into our duet philharmonic shirts and went to the stage to do a final rehearsal with the orchestra. Despite the seats being empty, the huge room made us all slightly nervous, and anticipatory of the big performance.

After a delicious BBQ, we prepared ourselves for the performance. As we walked out on the stage, we were overwhelmed by so many people watching us, and then the adrenaline kicked in. The Stravinsky was a great success; all of our hard work had been paid off, and we felt extremely proud of ourselves. In the second half we were able to watch the orchestra play the Mahler, which was amazingly dramatic.

The talent shown in the concert was incredible and it showed the passion of many young musicians. The Duet Philharmonic experience was unforgettable for me and I would extremely recommend it for anyone who has the opportunity to take part in it.