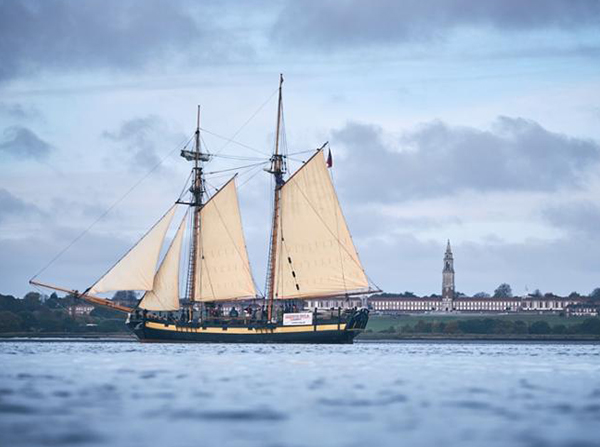 Pupils and staff from the Royal Hospital School's CCF joined the crew aboard the recently restored replica of HMS Pickle to mark Armistice Day.

The schooner set sail from Portsmouth to Suffolk on Friday 10 November, marking the end of her celebratory voyage to mark the original HMS Pickle's voyage to Falmouth carrying the news of victory at Trafalgar and the death of Admiral Lord Nelson.

The schooner dropped anchor in the River Stour off-shore in front of the Royal Hospital School in Holbrook at 11am on Saturday 11 November to mark an Act of Remembrance.

Cadets lent a hand to hoist the sails and learn about the ship's unique history whilst more than 1,000 onlookers gathered on the school's parade ground to observe the two-minute silence.

On board HMS Pickle the crew assembled and she signalled the end with a six-cannon salute. Flowers were then laid in the water.

HMS Pickle is owned by Mal Nicholson, who has personally invested and lovingly restored the replica schooner in celebration of Trafalgar 200 and marking the importance of the nation's maritime history.

Lt Cdr Nigel Griffiths, Head of Ceremonial at the Royal Hospital School, said: "We were honoured to welcome HMS Pickle on this busy weekend which involved an Open Morning, an Act of Remembrance, a reunion of former pupils, the Trafalgar Night dinner and our Remembrance Divisions and Service attended by more than 2,500 pupils, staff, parents and guests."