Peter Page was an institution in his own right. Born in Harkstead, Suffolk in 1929 to Phyllis and Albert, they moved when he was six weeks old to Lower Holbrook, where he grew up with his three sisters and brother. In January 1944, at the age of 14, he left school to start work as an apprentice to the Headmaster's Gardener, Mr Marjoram. Peter took over from Mr Marjoram in the 1950s. Each day Peter would go to the back door of the House to meet 'Cook' to find out what vegetables they required for the day. For one headmaster he even grew tobacco in the garden.

Peter was called up for national service and worked as a driver from 1948 to 1950 in the Royal Corps Signals. He was based in Dusseldorf Germany for most of that time. A friend of Peter's married a local German girl, and whilst at the Reception he sat next to someone from the German air force and they talked about Suffolk. The chap responded "The Royal Hospital School, we were told not to bomb that" The reason "it was a visual landmark for Nazi bombers heading to London, and secondly Hitler had identified the campus as accommodation for troops when the German's invaded England." How true? Who knows.

Peter met his wife Doris at RHS, she worked in the infirmary and they married in April 1955. They moved to The Lodge at school once Peter became the head gardener. Gardening was Peter's job, but his love was being on the river and fishing by the creek. 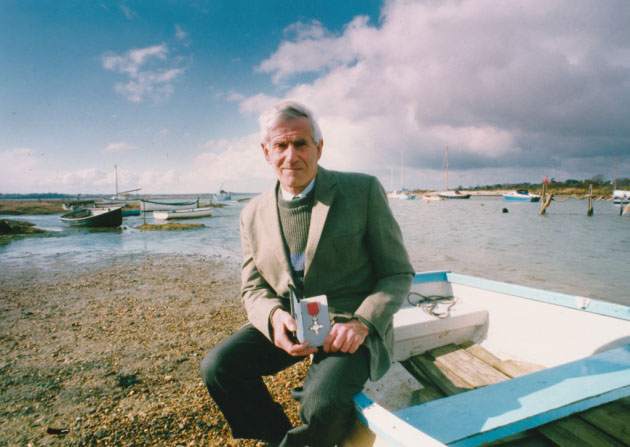 In 1995 Peter received an MBE in the New Year's honours list which was presented by HRH The Prince Charles. He retired in 1996 having worked at RHS for 52 years. Peter and Doris celebrated their golden wedding in 2005, Doris sadly died the following January. Peter continued to live at the Lodge until 2010 when in moved into Holbrook village. He passed away this summer aged 89.