Ruth Brown (Hood, 2015) who left RHS in year 11. Has just graduated with a 1st Class degree in Radiology from Sheffield Hallam University. Ruth will be joining the Royal Navy as a Radiographer following ten weeks of basic training at HMS Raleigh.

In the meantime, in mid-September her brother, Simon Brown (Cornwallis, 2019) received the news that he has been selected to join RMA Sandhurst in January 2021.Both Ruth and Simon were in the Combined Cadet Force at RHS. Their CCF Contingent Commander Major Jonathan Pooley said "Ruth was an intelligent, energetic and enthusiastic cadet and it is great news that she is going to use her skills and qualifications serving in the RN. She will be a great asset. As Head of the Army the section, Simon always aspired to a career in the Army. He excelled in all areas and led by example not least when he was on a cadet exchange with the US ARMY in 2016 at Fort Benning and WO1 (RSM) Karl Weaver SSI also described him as a "Top Cadet and future leader".

Their mother Mary Brown explained "It really is credit to the School that both my children are going into the Armed Services. The ethos of the school really opened their eyes to the opportunities within the Services. Special mention must go to Major Jonathan Pooley and Major Elizabeth Polson who have been a wonderful, supporting Simon's application to RMA Sandhurst". 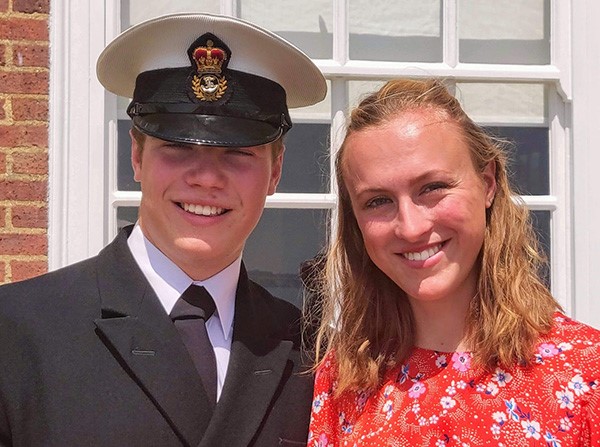 Major Pooley's final words "As their Biology teacher and CCF Contingent Commander, as well as being Simon's housemaster, I am very pleased to see both Simon and Ruth achieve their ambitions, and proud to see them live out the values of service we promote at RHS".

Both Ruth and Simon follow in the footsteps of many of their peers and we wish them the very best of luck in their future careers.