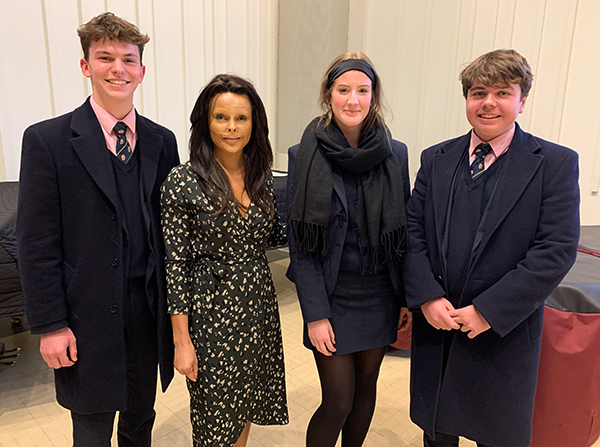 Presenter and fitness trainer, Annie Price spoke to sixth form pupils about her story and shared how she has dealt with adversity, setbacks and frustrations in her own life.

Annie began her television career in 2016, telling the story of her childhood in the film Annie: Out of the Ashes for BBC Three. The documentary follows Annie's journey as she seeks to discover the truth around her childhood and an incident where she suffered severe burns in a fire in the caravan in which she was sleeping when she was just four months old. Following on from this, with her characteristic warmth and humour, Annie went on to make Plastic Surgery Capital of the World and Tiredness Tears and Tantrums: Diary Of A New Mum, both for BBC Three. She was named on the 2018 BAFTA Breakthrough Brits and last year saw Annie make a new documentary Inside the Cage: The Rise of Female Fighters for BBC Three which is still available on BBC iPlayer.

Annie shared five things that have helped her to be the positive and successful person that she is and to cope with feelings such as anger, frustration and sadness. Firstly, she talked about being positive, actively choosing to be optimistic and cultivating that attitude daily. Secondly, being grateful for the things you have and for your experiences, she recommended occasionally making a list to give you time to reflect on those things. Thirdly, using the challenges we face in life as an opportunity to change and become stronger, adding that we are the only ones who control our own actions. Next she touched on mindfulness and meditation or just 'being', it was unimportant what label or how you did this but vital to stop and think about how you feel and reflect. In relation to negative feelings she said, "these feelings can come but we don't have to react." Lastly she encouraged pupils to think about the impact the words and actions they make have, for better and for worse, and choose what impact they want to have on the world.

Annie's own reflections on her life were examples of patience, forgiveness and calm perseverance at times when anger, frustration and apathy would have been truly understandable. She was a wonderful speaker to have at this time or year of renewal and reflection, a truly inspirational remarkable woman.

Mr Graham, Head of Sixth Form and Careers said, "Annie left the sixth form pupils with five very practical tips on being successful and I am sure that they will be put into practice. We bring in speakers like Annie for the Sixth Form Enrichment Programme to inspire, educate and inform our pupils - Annie certainly achieved this."