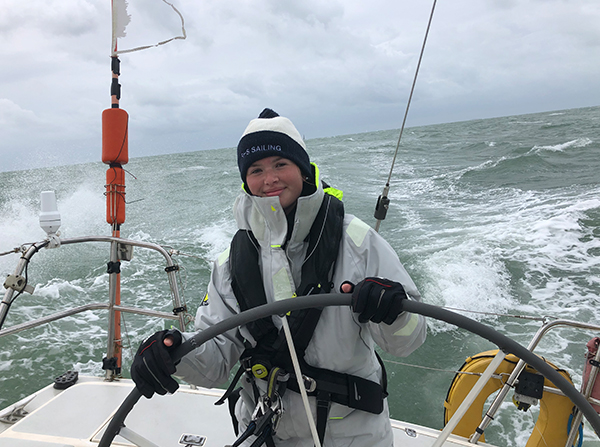 RHS pupil, Josie Ruffles, who has just entered Year 13, has had an extraordinary year when it comes to her sailing accomplishments. As well as completing the Royal Ocean Racing Club 2019 Rolex Fastnet Race this year like her brother Toby, before her in 2017, she was recognised by the East Anglian Offshore Racing Association for her success who named her the Young Sailor of the Year 2019 - a very prestigious award.

The prize giving was supposed to be in Ostend, Belgium last weekend, following the final race of the season, the Buckley Goblets, which involved Josie and her father racing across the North Sea for the sixth time this year. Josie has also crossed the Irish Sea twice and undertook around 2000 miles of hard yacht racing, including winning the Wallis Cup, in which she skippered the boat.

The final race itself proved tough with a force 6-7 wind and waves of four meters, but Josie battled on and completed it in nine hours. The forecast for the return on Saturday suggested even higher winds, so the presentations were postponed until the Annual Dinner in November, allowing the yachts to turn around quickly and head back to the UK. Sadly, the forecast was wrong, and the high winds hit the sailors in the middle of the North Sea, making it very rough with winds of over 40 knots.

Josie and her father experienced damage to their mainsail and Genoa sails but managed to get home in 13 hours.

The prize of Young Sailor of the Year will be presented on November 9 at the Medway Yacht Club, where the dinner is being held, but it clashes with the RHS Trafalgar Evening, so, in Josie's words, they are 'going to have to make a plan!'

You can listen to Josie being interviewed about her sailing experiences on Stephen Foster's BBC Radio Suffolk show here: