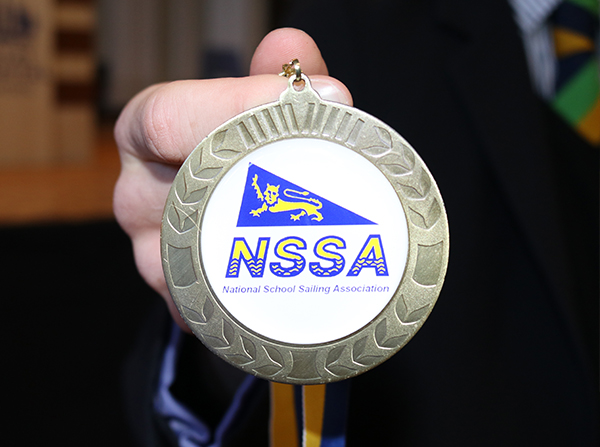 Sailors were presented with medal and awards by the Headmaster at Monday's assembly for their competitive efforts and successes over the last term.

This term started with our team racing event – The Suffolk Shiver. Two RHS teams were joined by teams from Rugby, Sevenoaks and RGS Guildford Schools along with Rutland Sailing Club and Royal Harwich Yacht Club. A full programme of 44 races was completed with each team sailing the other eight teams in the league. The standard of racing was the highest this annual event has ever seen. Unfortunately, the RHS teams finished 7th and 8th in the league but invaluable experience was gained throughout the day in the close, competitive races.

During the first nine weeks of the term, 11 pupils competed in the Alton Water Frostbite Series consisting of 16 races raced each Sunday morning. The racing was very competitive with over 80 boats taking part. Stand out performances over the series were from Ben W, who received the Endeavour Award; Imogen P, who finished 3rd in her class; and Alissa M and Jorja M who finished 1st in their class and 22nd overall.

Last weekend sailors from Years 8-10 attended the RS Feva Spring Championship were five races were sailed. Congratulations to Daisy W for a great performance that saw her earn a 2nd overall. Other notable performances were from Alissa M and Jorja M who finished 32nd out of 53, including a 17th overall in one of the races and Ben W and Luke P scored an excellent 22nd in one of the races and finished 36th overall. Well done also to George R and James H for stepping up and competing in their first national event.

In the same weekend the First Team competed in the National Schools Sailing Association Team Racing National Championship with the team comprising of Archie H, Josie R, Josh D and Winston Squires. The team won a credible seven out of their eight races, finishing 4th in the league and progressing them to the semi finals. Defeat to the team from Rutland Sailing Club in a tight semi final ended their hopes of winning the competition but a 4th place finish, and 2nd school overall was an excellent result from the day and a good improvement from last year.