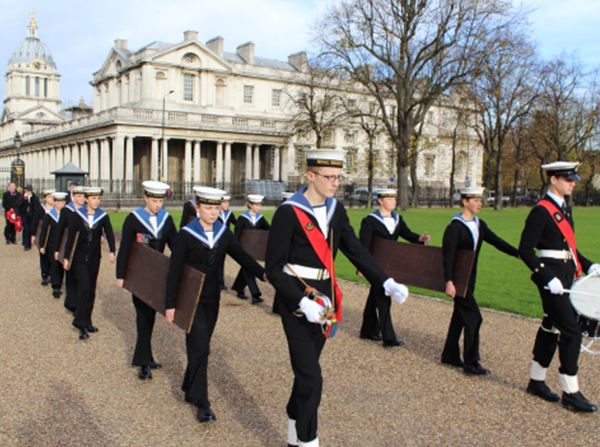 On Tuesday 11 November, a group of Year 8 pupils travelled to the original site of the Royal Hospital School in Greenwich. They took with them six oak boards naming 151 former pupils who attended the School between 1889 and 1918 and lost their lives during WW1.

The School party, dressed in their ceremonial naval uniforms, paraded the boards to the Queens House where a wreath was laid, followed by the Last Post and a two minutes silence.

The boards make up a former War Memorial measuring 13ft by 6ft, which originally hung in the Great Hall of the Queens House, Greenwich with the inscription In Proud Memory of Those Old Boys who fell during the Great War, 1914-1918, Lest we Forget. They were brought to Suffolk in 1933 when the School relocated and were reused as honours boards with the original names being hidden. They were rediscovered in a disused garage at the School in December 2013 and, when the veneer was removed, the ghosted outlines of the names of the fallen were revealed.

Amongst the names on the boards, the youngest boy listed was Charles Ernest Timmins, a 14 year old from Kent who was the bugler aboard HMS Cardiff. Timmins lost his life in 1917 whilst alerting his ships company during the battle at Heligoland. He was killed when a piece of shrapnel from a shell blew a hole in his ships funnel and pierced his bugle.

This bugle has been located on the Type-45 Destroyer HMS Dragon and, in acknowledgement of this important historical link, the Royal Navy sounded the Last Post on board HMS Dragon at sea as RHS pupils played at the Queens House in Greenwich and at the School in Suffolk.