RSS Feeds Subscribe to Alerts
Winter Series on the Chelmer 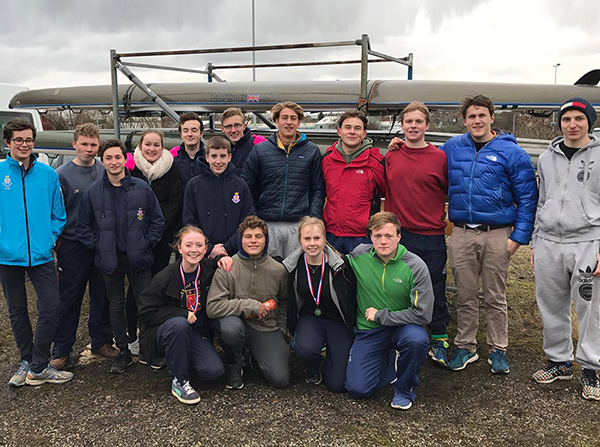 Last weekend in their first competitive outing as a squad, the prospective Devizes to Westminster paddlers acquitted themselves very well, with no capsizes on a very bumpy river ride through the middle of Chelmsford and all 8 crews finishing strongly in the FRA Winter Series.

The Flatwater Racing Association Winter Series is a series of six marathon canoe races held between November and March on the Chelmer, Lea, Stort, Cam and Roding. The races are often attended by some of the best paddlers in the region with individual trophies available to win and clubs battling for the overall trophy as well. The Dick Grieves trophy is awarded for the club with the most successful junior team.

In the Open Canadian class, Tom Joice and Cedric Hoskyns-Abrahall finished in 5th place in a strong field; in the highly competitive K2 class Freddie Braybrooke and Richard Vallance were 7th, after a great performance in the second half of the race.

On this occasion, bragging rights go to Hannah Dixon and Tash Scott, who were the leading ladies' crew winning first place. The strong performance from all our paddlers pushes RHS currently into second place for the DG trophy for novice juniors.

There were over 160 boats in the various categories out on the water and thanks must go to the parents who came and supported the RHS team on such a cold day!