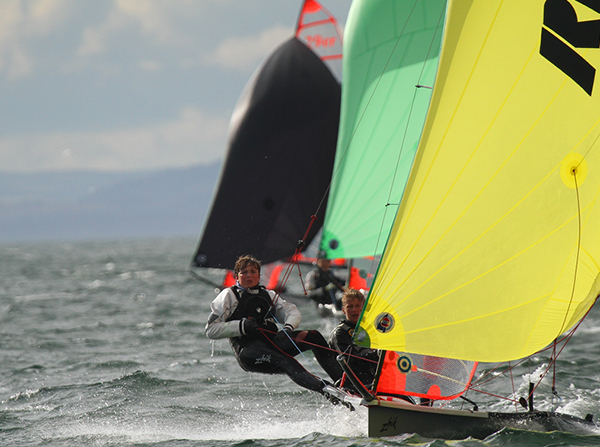 Last weekend Daniel P and Arthur B took part in the RYA Transition Squad trials at Queen Mary Reservoir. The Transition Squad provides intensive coaching, development and support to sailors who have the longer term potential to represent the UK at an International level.

There are only twelve National Transition Squad places available which are fiercely contested for. The competitors are coached and assessed over four gruelling weekends to compete for a place.

The morning consisted of technical lectures and briefings and then the fleet were sent sailing in the afternoon to race and practice manoeuvres. This was followed by debriefings that ran into late evening. Dan and Arthur were on good form; consolidating their RHS training and coaching, they showed good speed, boat handling and tactics finishing in the top two boats.

Coinciding with the first Transition Squad weekend was another major event called Bart’s Bash. This was a world-wide organised fun race event to commemorate Andrew Bart Simpson, the sailing legend who tragically died in 2013 in a training accident in San Francisco bay while preparing for the America’s Cup competition.

Over 200 competitors took part in the Queen Mary Bart's Bash race including all the Transition Squad hopefuls and one of the fastest sailors on Earth Sir Ben Ainslie.

Sir Ben is the most successful sailor in Olympic history; having won medals at five consecutive Olympics from 1996-2012 including Gold at the last four. Dan and Arthur not only had the opportunity to race against Sir Ben but also to try and beat him and they really, really wanted to beat him.

Following an early morning technical lecture, they set their boat up for the fresh and breezy conditions, discussed their strategy and tactics and took to the water to compete in Bart's Bash. They had a great start and were the 3rd boat round the windward (first) mark. Competition was fierce as boats jostled for first place. They drew on all their training and held their nerve and after a nail-biting finish came third overall – beating Sir Ben and all the other Transitional Squad hopefuls.

To finish off their exciting and successful weekend, Sir Ben took the time to say hello and congratulate them.