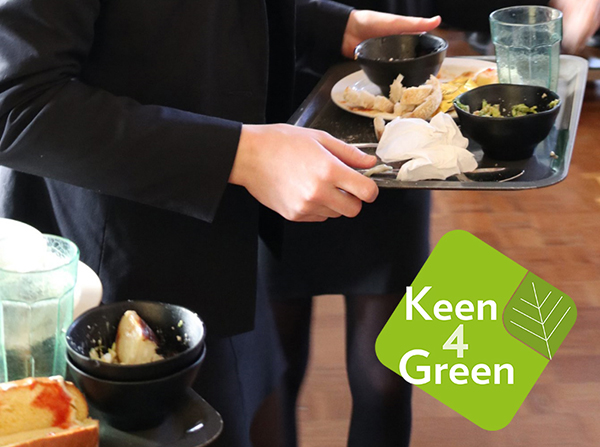 Since the beginning of the year the Eco-Committee having been waging war on food waste. For the third stage of the Keen4Green competition they have been measuring how much food is thrown away from pupils’ plates after lunch in the Dining Hall.

Armed with scrapers and aprons our diligent eco-warriors inspected the plates of leaving diners and collected any leftover food into individual house buckets to see what type of food was being left and encourage pupils to only take what they can eat. Pupils are told that if there is something that they don’t want to eat, they just need to ask the catering staff not to include it while being served; they can also ask for smaller portions. In the areas where pupils self-serve they are asked to take as much as they wish, while being conscious of potential waste. Information on what gets left on plates the most, was fed back to the kitchen so they can change the way food is served or adjust menus accordingly.

Committee members had estimated that there would be a certain amount of waste, as reported by the catering staff, but were shocked at how much they were able to collect in a single lunchtime. The first of these surveys was also done in a very visible corner of the Dining Hall meaning the word had got out and the competitive element drove the waste down. This meant that it was unrepresentative of a typical day, but importantly, served to raise awareness of food waste and get people thinking about what they are putting on their plate and what they realistically want to eat. The school does not have a major problem with food waste, but waste can be reduced, and more sustainable eco-friendly behaviours can be adopted by the pupils at school and throughout their lives, if they consider the impact they are having at every level. Subsequent surveys were a little more sneaky rendering reactive group tactics useless against the spatulas of the Eco-Committee.

Gold stars were given out to those who had managed to achieve ‘clean plate club’ status and it was noted that although staff were not officially measured they set a good example and left very little waste.

On each day food waste was measured, Keen4Green points were awarded to the lowest three food waste producing houses. The points earned from this mini-competition will be added to others earned for saving energy and recycling to give the results of stage three. Stage two of the competition saw Raleigh scooping the first prize and the £100 jackpot. Cornwallis took home the £75 second prize, and Hawke were awarded the £25 runners up prize. Will they hold their own in stage three, or be knocked off the top spots by those with the best eco-behaviours in the dining hall? The results will tell when they are released in the first week of March.