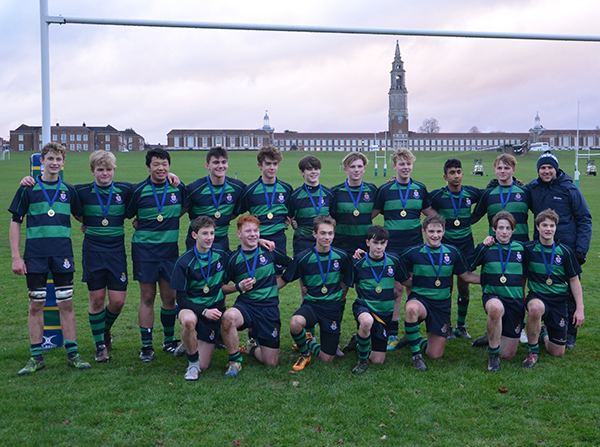 The Royal Hospital School U15A boys' rugby team finished the season with another commanding performance against Framlingham College on Saturday 8 December winning 52-0. This season has been an impressive one, seeing the team notch up 16 wins from 16 games, scoring 570 points and conceding only 58. This marks their fourth consecutive unbeaten season.

Parent of one the players and avid supporter of the team, Gordon Puckey, expands:

Take a step back in time, a little over four years – to September 2015. The latest cohort of Year 7s arrive at the Royal Hospital School – many lost, most nervous, all eager to please. Amongst them a nucleus of boys playing rugby for local clubs – Colchester, Bury, Ipswich and Maldon – many of them scouted in their early years as part of Northampton Saints' Development Programme. Jump to the present, to December 2018 – and how they have all pleased!

Last Saturday, playing to a large crowd and their last scheduled game this year, RHS U15As defeated their opposition, Framlingham College, in a one-sided affair, posting yet another clean sheet. In doing so, they closed out a fourth consecutive season unbeaten and wrote a chapter in RHS rugby history. It has been a remarkable journey.

So, what is it that has powered this winning mentality?

The fact that so many of the boys had played together on the club circuit clearly helped, but it is perhaps some of the values held so dear in every walk of the school, and which the boys have upheld, that have been the determining factor. Loyalty to each other, courage on the field, and an absolute commitment to winning.

It is difficult to pick out defining moments over the years. Colchester Grammar School, an excellent team themselves, caused the boys to dig deep last year but there are two matches which have come to define this team in recent months. 14-19 at half time in their encounter with The Perse, the boys scored 19 points without reply in the second half to leave the hitherto unbeaten visitors in a state of shock. There was steel in abundance. However, it was the visit to Campion in November for their 3rd round fixture in the National Schools Cup which confirmed their intent; a force to be reckoned with and a team who play for each other, with pride and determination. Strong contenders, Campion lost 0-40 in trying circumstances and the boys' determination to ship not a single point was telling of the team mentality. The 4th round fixture at Simon Langton Grammar School was exhibition rugby at its very best, the score-line even more decisive.

The team has of course evolved over the years. Some have given way to boys who joined the school in Years 9 and 10 – and all deserve much credit for the part they have played in this success.

The Daily Mail Cup, then NatWest Trophy, now simply the National Schools Cup – played at U15 and U18 – is the most highly coveted title in boys' rugby, and until last year, the Royal Hospital School had not entered. But this is a team that parents and coaches alike have always thought capable of a good run – and so it has proved.

On Thursday 17 January, and having played away in rounds 2, 3 and 4, RHS will host Whitgift School – a school with a rugby pedigree, and which won the U15 Cup last year. The boys know they will have to play their best rugby yet to become winners of their region and to progress to the last eight.

Whatever happens, the RHS U15s will play with passion, with respect for the opposition and the game, and with absolute integrity – values that are engrained in this team, just as they have been part of the school's philosophy from the very beginning, three hundred years ago.