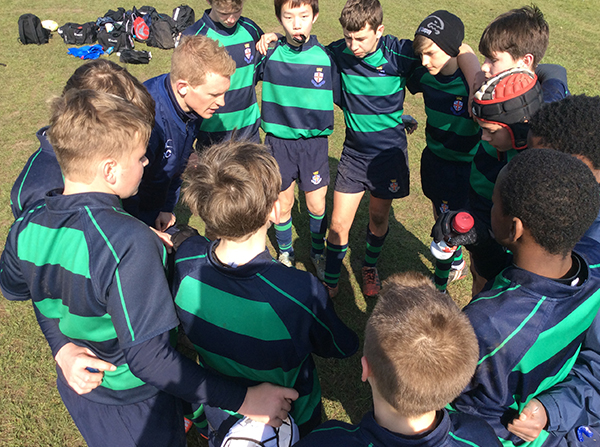 The U13s travelled to Rosslyn Park 7s in good spirit having reached a final at the Suffolk 7s and winning the Brentwood 7s tournament. However, Rosslyn Park is now the biggest schools tournament in the world and is always a tough test for any squad of players with 128 teams entering!

RHS were placed in a competitive group that contained Eltham College, Thomas's School and Hymers College. After a rushed warm up Eltham College were the first test and it was RHS who were able to settle their nerves and started the stronger of the two sides, scoring two quick fire tries. However, Eltham contained some danger players who they allowed to get up a head of steam and pull a try back. Continued defence in the first half ensured that Eltham would not claim a second try. In the end this probably proved a key reason for a positive second half display and RHS were able to turn on the style, playing some well-structured and encouraging 7s to win 29-14.

Next up were a tricky Thomas's side from Clapham. RHS started strongly and were able to stretch the oppositions defence, however they were drawn into somewhat of a dog fight which played into Thomas's hands. As a result the game was tight throughout. However, hard work and commitment from the side saw them through to win 17-12. This set up a winner takes all group decider vs Hymers College from Yorkshire. Having won their past two matches Hymers were confident, however, it was RHS that started the stronger of the two sides with much of the possession. Unfortunately they were unable to make this possession count as Hymers stood firm in defence. As a result Hymers were able to turn over ball at key moments and turn defence into attack. RHS were a little slow to react to the change in standard of opposition and conceded some easy tries to go in at half time 15-5. With all still to play for RHS, again, started strongly but were foiled on the opposition try line and allowed Hymers to go the length of the pitch. Had this have resulted in a score for RHS who knows what might have gone on to happen. As it happened RHS struggled to get a hold on the game as Hymers moved further ahead and ran out 36-5 victors – probably not a true reflection of a competitive and tense game.

RHS proved that are a highly competitive side and have much to look forward. Luckily they have one more tournament to attend at Franklin's Gardens. This will be a day to remember for all.