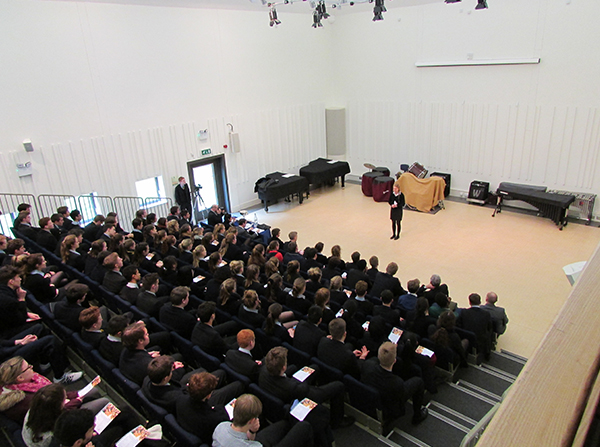 The inaugural Todd Declamation was won by Head of School, Issy Williams, with her talk on ‘The secrets of Kim Jong-un and North Korea'.

This is an individual public speaking competition open to sixth form with the aim of encouraging and developing high quality public speaking. There were 14 entries to the competition and, after a preliminary sitting, seven finalists were selected and spoke on the following topics:

Each competitor was required to speak for around 7 minutes on a chosen subject and was judged on the persuasiveness of the argument; the pleasing rhetoric used to put it across and the candidate's approach and bearing as well as the quality of the research into the chosen topic. The competition demanded a controlled and polished public speech in which form, content and presentation were all scrupulously prepared.

Winner of the competition, Issy Williams, said “I decided that I wanted to choose something slightly mysterious as my topic, and eventually decided on ‘The secrets of Kim Jong Un and North Korea'. My speech was a balance of the slightly amusing habits of the North Korean dictator, such as calling his wife “comrade”, but also focused on the serious side of life in North Korea, in particular the concentration camps, nuclear threat, and anti-American propaganda. My overarching argument lay in the fact that despite the extreme actions of Kim Jong Un, his secret life doesn't remove the nuclear threat which faces countries such as ourselves today, and I sought to remind the audience that despite being able to find a source of entertainment in a discussion of Kim Jong Un and North Korea, there remains a very grave side to the issue.”

The Todd Declamation trophy will be presented on Speech Day.