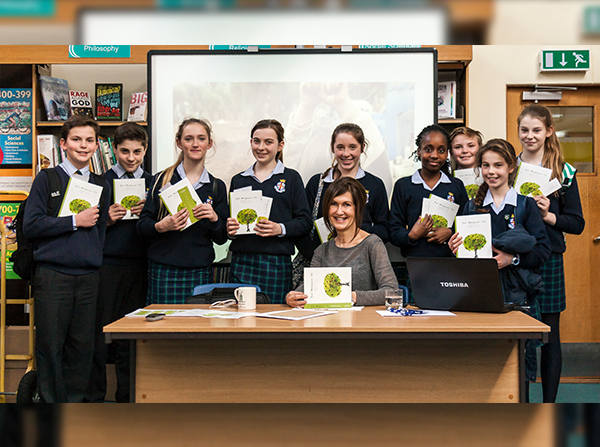 Author and journalist talks to pupils about Syrian refugee crisis

To celebrate World Book Day, the Royal Hospital School welcomed author and journalist, Vanessa Altin, to talk to Years 8 and 9 about her experiences as a journalist and the inspiration for her book, The Pomegranate Tree.

The Pomegranate Tree is a book for young adults on a controversial subject that shocks in places but will leave the reader uplifted and full of hope.

In the summer of 2014 a black plague swept across Syria a killer cult spreading misery and murder. Sitting in the shade of a Pomegranate Tree, we meet Dilvan, a young Kurdish refugee girl whose family have been ripped apart by the war. Through the pages of her diary, we follow Dilvan on her quest to find her family with courage, hope and a determination to fight, maybe even to die but never to surrender.

Vanessa Altin is a hard news journalist turned author. She splits her time between the UK and Turkey with her Kurdish husband and two daughters. Vanessa has reported widely on the atrocities in Syria and particularly on the struggles of the swathes of refugees on the Syrian/Turkish border.

Vanessa was so moved during a recent trip, she launched a social media campaign for a Kurdish refugee camp, raising thousands of pounds for their children in just 48 hours. She and her husband loaded trucks full of clothes, toys, pens, paper – the most basic of things to make the daily lives of these children, who have witnessed unimaginable violence, more bearable. These children inspired Vanessa to write The Pomegranate Tree.

Vanessa said it was time these children had a voice that reaches out to the rest of the world.

Ruth Gitsham, School Librarian, said "I was delighted to be able to welcome Vanessa to RHS. The Year 8 and 9 pupils listened with great interest to her talk and very many of them purchased a signed copy of The Pomegranate Tree. Although the story is harrowing at times, it is ultimately a story of hope over adversity and this was the message that came through from Vanessa. This book could not be published at a more poignant time. It is a beautifully written story that reflects the recent horrors in Syria through the eyes of a child."