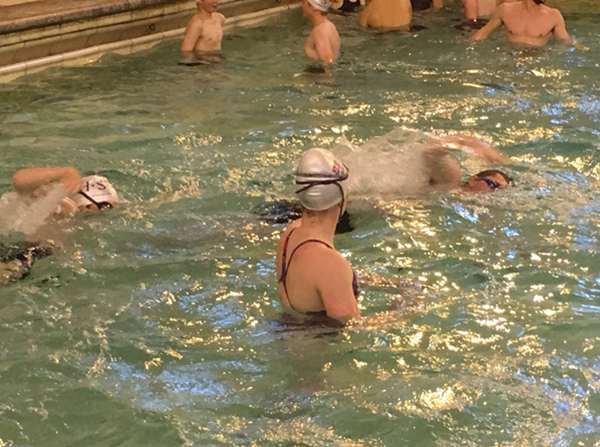 Tom and Sophie, both from Swansea, are competing in the Elite Race of the Great East Swim at Alton Water on Saturday which forms part of the European Championships selection criteria. The race is held over 5km and features the best of British swimmers.

This afternoon they provided a masterclass session in the Royal Hospital School’s large indoor pool for the 12 to 18 year old swimmers followed by a demonstration and finishing with a Q&A session.

Swimming teacher, Katie Marriot, said “Our pupils have worked really hard over the past 8 weeks, committing to their training plans and making some dramatic improvements. We are very grateful to Tom and Sophie for sharing their invaluable experience. I know that they will have calmed a few last minute nerves, particularly amongst those who are competing in the Great East Swim for the first time.”

More than 35 members of the Royal Hospital School community will take to the water in this year’s Great East Swim. The event is in its fifth year and attracts around 3,000 swimmers and involves a 1/2 mile, 1 mile, 2 mile and 5k open water course. It is part of the Great Swim Series which has five events across England and Scotland attracting in the region of 22,000 participants.

The event kicks off at 8am on Saturday with the 5km swim and other distances will be spaced out throughout the day. In addition, this year’s Great East Swim will also feature a brand-new 10km marathon swim.