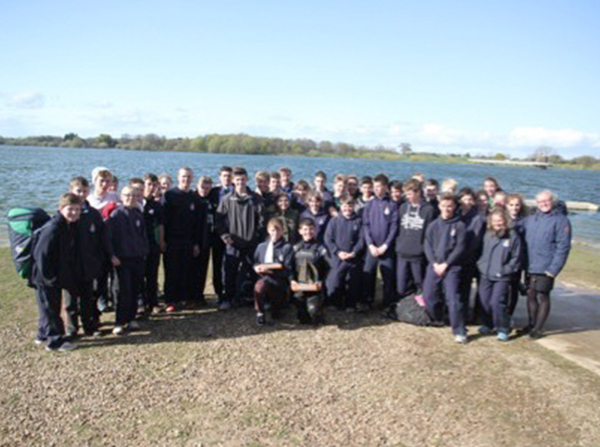 On Saturday 23 April, 138 sailors took to the water in the RHS Spring Team Racing Championship. Teams from 10 different schools and sailing clubs competed in a youth event sailed in fireflies, and U15 event in RS Fevas.

The conditions were perfect for racing, allowing the running of a 20 race round robin for the juniors and 36 races for the youths. The youth event was split into gold and silver fleets with RHS Green and Blues teams both making the gold fleet, along with Norwich and Stanford. RHS 3rds and U16 team both qualified into the silver fleet with Colchester Royal Grammar and an RHS old boy team.

The Fevas finished with RHS A and C progressing into the semi finals along with Walderingfield Sailing Club Starboard and Norwich school. Having been the leading teams all day RHS A and Walderingfield Starboard progressed from the Feva semis to meet in the final. The final though didn’t prove to be close, with RHS A running out 2-0 winners. This is the 5th year in a row that this event has been won by RHS’ junior 1st team. Well done to James Oakley, Joe Fletcher, Tristan Richardson, Xanthe Jones, Jack Berry and James Hawthorn.

In the gold fleet RHS Green and RHS Blue both won their respective semi-finals convincingly 2-0 in the best of three fixtures, setting up an all RHS final. Again in a best of three fixture it was RHS Blue who took the first victory, having lead most of the race. However RHS Green responded well under pressure and won the second, to set up a winner takes all final. The third race was very competitive; with neither team able to get a comfortable lead until a penalty turn for a RHS Green boat on the final leg of the course gave RHS Blue the win. Well done to Tom Joice and Lulu Knott, Harry Bone-Knell and Richie Hill and Arthur Brown and Daniel Pittock.The youth sliver fleet saw some very close racing, with Colchester Royal Grammar and RHS old boys reaching the final. The final itself went right to the wire and was won 2-1 by Colchester.