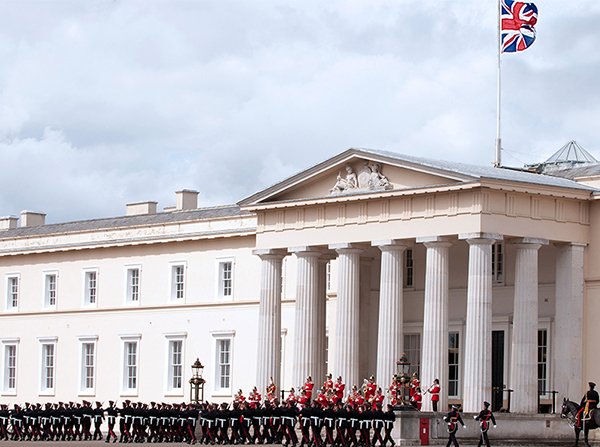 The Royal Hospital School’s naval heritage and links with military families has always meant that we have had a long history of pupils wishing to pursue a career in the Armed Forces. The Royal Military Academy Sandhurst in Surrey is where all officers in the British Army are trained to take on the responsibilities of leading the soldiers under their command. Recently we have had a large number of our former pupils who are either currently at the academy or have been newly commissioned. At the end of the course an officer will be qualified to lead and manage soldiers while at the same time upholding the British Army's core values of selfless commitment, respect for others, loyalty, integrity, discipline and courage.

Military training is infantry-based so that everyone, no matter what their eventual regiment or corps, will have mastered the core essentials before they go on to more specialised training after Sandhurst. Overall, the core objectives of the Commissioning Course are:

To develop commanders of courage and willpower, with the temperament for decisive action in difficult and dangerous circumstances.

To foster attitudes to integrity, selflessness and loyalty which set the soldier apart from others.

To teach Officer Cadets how to think and communicate as commanders and to foster a deep interest and care for the individual.

To achieve a grounding in British Military Doctrine and its significance in all forms of conflict.

To encourage the analysis of strategic and war studies as a foundation to military thought and wisdom.

To train Officer Cadets in the basic skills and battlefield disciplines of soldiering.

The Commissioning Course for Regular Army officers is broken into three terms over 44 weeks, the purpose being to expand an Officer Cadet's character, intellect and professional skills. Training at Sandhurst covers military, practical and academic subjects, and is mentally and physically demanding.

Just entering the first term is O/Cdt Angus Beaton (CD) who will transform over the first 14 weeks from civilian into soldier acquiring all the basic military skills needed at Sandhurst’s most famous and beautiful building, Old College. In Term 1 there's very little free time, as the schedule is packed with introductions to leadership, tactics, map reading, living in the field, weapon handling, drill, physical training and personal administration such as ironing, polishing boots and room layout.

The first major hurdle is the drill test known as "Passing Off The Square" at the end of Week 5, then comes the most physically testing exercise of the term: Exercise Long Reach, a 36-hour patrol competition in the rugged terrain of Wales. 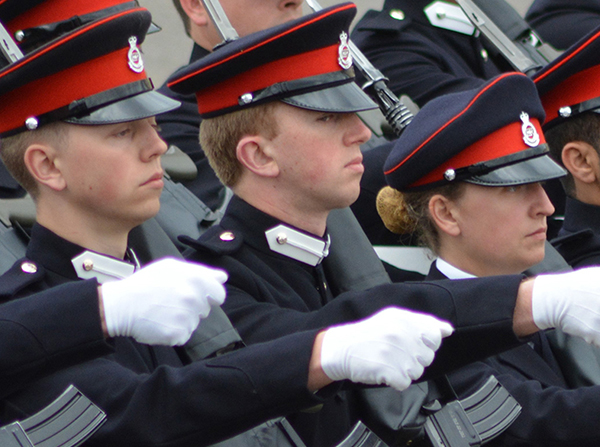 In Term 2 we currently have O/Cdt Oliver Ainsworth (CD) who left behind Old College and moved into New College, where the emphasis turns more to leadership, initiative and the role of the officer. Officer Cadets start to spend more time in Faraday Hall, the academic wing of Sandhurst, studying subjects like conventional war, international affairs and leadership psychology, but there are still plenty of tough, demanding field exercises.

Throughout Term 2 Officer Cadets do the detailed planning for the Adventurous Training expedition they will go on during the first week of recess which can include rock climbing, diving, sailing, skiing, hill walking, trekking or sky diving.

O/Cdt Sam Richards (RL) having sustained an injury is persevering with rehabilitation, repeating the third term with the Lucknow Platoon. O/Cdt Harrison Jeffries (CD) has also made it to this final stage and was part of the winning team at the U.S. Military Academy West Point Sandhurst Competition an event that has been held at the New York base since 1967. They were ranked the number one international team and 2nd in the overall scoring in a field of 62 teams. 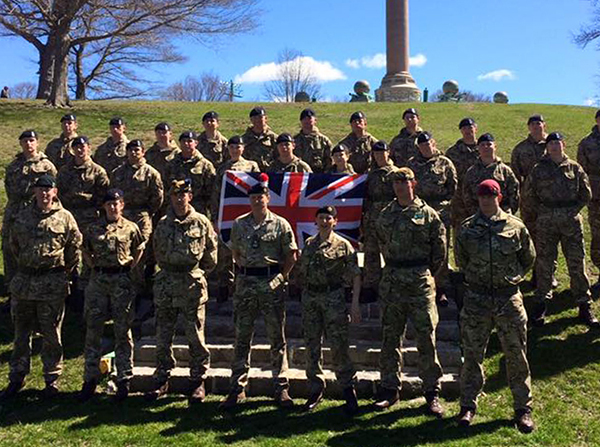 The third term’s focus shifts from learning about conventional war to different kinds of operations, such as counter-insurgency and peacekeeping. Again, Officer Cadets take part in demanding and realistic field exercises which include live firing. In just a few weeks some of them will be deployed on operations under the flag of the United Kingdom, the United Nations or NATO.

The final term ends in a flurry of returning kit to the stores, packing boxes, getting measured up for the uniform of their new regiment or corps and final preparations for the world famous Sovereign's Parade in front of Old College. Family and friends come from far and wide to join in the celebrations that mark the end of a tough but immensely fulfilling year at Sandhurst and the award of The Queen's Commission to the proud new British Army Officers.

The course is broken down into two distinct phases;

The Tactics phase is followed by the Live Fire Tactical Training LFTT phase, which enables Officers them to plan and conduct realistic field firing exercises in their units.

Richard will then be joining 2nd Battalion The Yorkshire Regiment (2 YORKS), a light mechanised infantry battalion equipped with the Foxhound Protected Patrol Vehicle and a range of small arms and support weapons under the command of Lieutenant Colonel Samuel Humphris MBE. 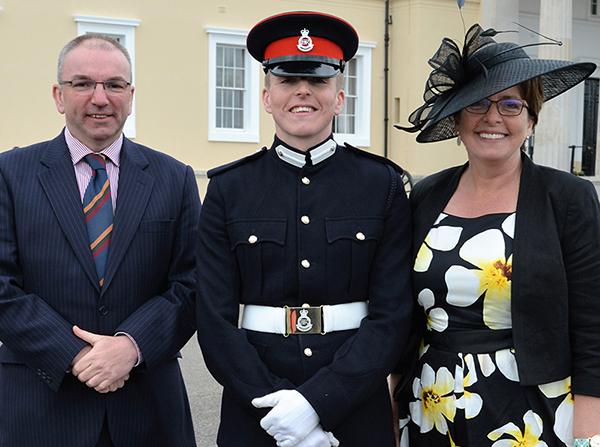 We wish these young officers the best of luck as they continue their training and careers and their examples of dedication and perseverance are a credit to the school and their families.