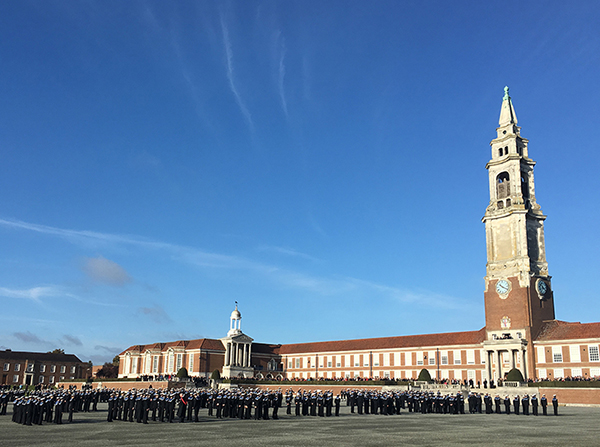 The whole-school community gathered together on Sunday to pay their respects to all those who have given their lives for the peace and freedom we enjoy today.

The Queen’s Banner was paraded with pride and former pupils of the School formed the Royal Hospital School Association (RHSA) banner party for a powerful and poignant Divisions bringing together generations of families to reflect and give thanks. Poppies and medals were worn proudly by pupils, parents and alumni; symbols of sacrifice to honour our veterans and those who have suffered loss and life in conflict.

The Reviewing Officer and Guest of Honour was Commodore Mike Beardall MA MCIPR RN. Clear blue skies echoed the sound of the Band and marching feet in what was an unusually mild autumn morning as the Commodore made his rounds. We were gratefully honoured by the attendance of the Commodore, who currently serves as Head of Strategy in the Directorate of Defence Communications, on such an important military date in the year.

The terrace and edges of the parade ground were lined with onlookers and families, some in uniforms reinforcing the strong traditional links that the School still has with the Armed Service and the values they hold.

Chapel was filled quickly; with standing room only being available for the popular annual service. The Chamber Choir performed beautifully throughout, leading the music that set such a wonderful atmosphere, and the Brass Band played a vigorous rendition of the National Anthem from the gallery to close a thoroughly moving service.