RSS Feeds Subscribe to Alerts
Rome and the Bay of Naples 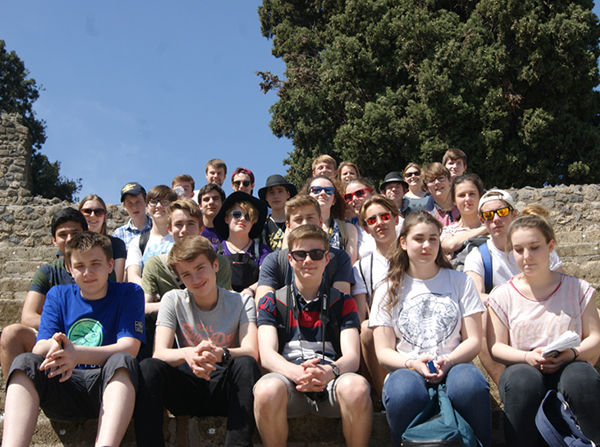 Classical fun in Italy for Latin and Classics pupils

Over the Easter break, 26 pupils of Latin and Classical Civilisation visited Rome and the Bay of Naples to further their study of the Classical World.

After an early morning flight to Rome, the group toured the Roman harbour town of Ostia before arriving at their hotel, only a stones throw from the beautiful St Peters Basilica. The next day saw a packed tour of the city, including the Colosseum, Forum Romanum, Pantheon, Trevi Fountain, Ara Pacis, Piazza Navona and St Peters Basilica.

The group then travelled south to Sorrento, stopping en route to explore the remains of Hadrians Villa at Tivoli. In Sorrento, the group were based in a hotel with a glorious view over the Bay of Naples with Mount Vesuvius dominating the landscape. The next few days saw visits to Pompeii, Herculaneum, Oplontis and an ascent to the summit of Mount Vesuvius itself.

After a tiring few days, the pupils returned to RHS from Naples Airport. Everyone thoroughly enjoyed the trip and is well-placed to use the trip to enhance their appreciation of their Classical subject at GCSE and A Level.