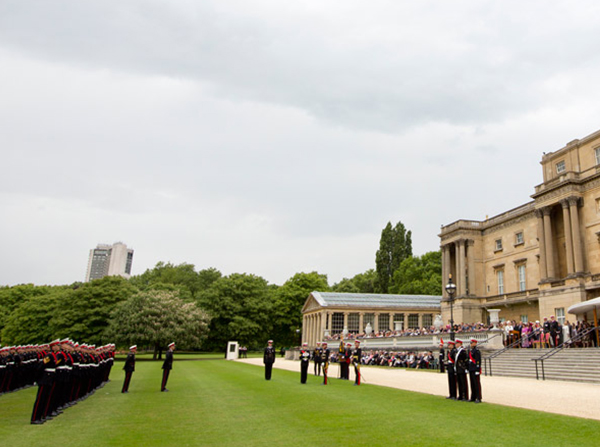 The Parade consisted of some 350 cadets and 100 instructors who trained for the event at the Royal Navy Drill School (HMS Excellent) in Portsmouth for three days beforehand before taking up post in Horse Guards Parade in London. There they were met by the Band of Her Majesty’s Royal Marines and formally marched in formation up The Mall, into Buckingham Palace. The formal Parade took place on the lawn of Buckingham Palace with Prince Philip, Duke of Edinburgh (the Captain General of the RM Cadets) as the inspecting officer.

The Parade was attended by many high dignitaries, ministers of state and the most senior military officers as well as over 1,500 other guests of the participants.

The Parade marched past the Duke who took the salute before marching out of Buckingham Palace, up Birdcage Walk to Wellington Barracks – the home of the Guard’s Regiment for a well-earned reception. The Duke and Ministers then mingled with the cadets and guests for some well-earned refreshments. During the reception CCF promotions were delivered to Cameron Fairrie, Jordan Scott and Liam Crismani to Sergeant, Matt Khan to Corporal and Natasha Scott to Lance-Corporal.