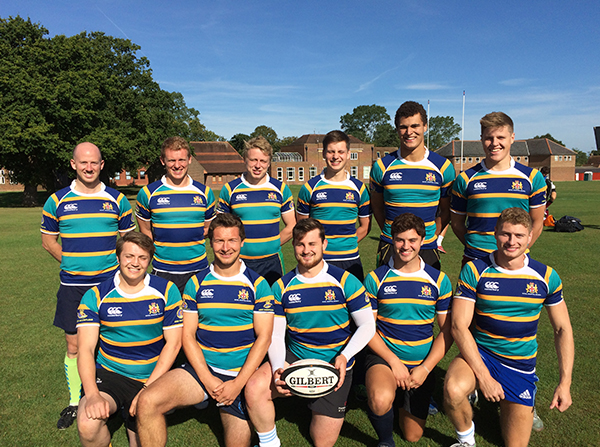 In the inaugural Sparkle Malawi 7’s held at Felsted School the RHS Old Boys arrived with a squad of 14 albeit with only 10 fit and able bodies! The U25 outfit, including Mr Wood, Housemaster of Cornwallis, were keen to leave their mark on a tournament that contained many of the South East ‘big hitters’. Within their group Tonbridge, Oakham and a Felsted select XV stood between them and the group stages. First up were Tonbridge in what proved to be the key game. RHS were behind for much of it but worked hard to score two well worked tries. With the last play of the game called and 4 points behind a silly error by Tonbridge saw RHS take a quick penalty (taken by Owen Herbert) to win by one point. The next two games were somewhat of a formality as RHS cruised to victory. The highlight being a converted intercept try for Tom Wood vs Oakham however, in the process Josh Allday was ruled out of the rest of the day through injury.

Onto the semi-finals and RHS faced a younger and fitter Felsted side. Through sheer grit and determination RHS ran out close victors. Chris Gregory providing energy throughout and Matt ‘The Engine’ Parker working tirelessly in defence.

The final saw RHS take on the favourite to win, Cranleigh. With danger all across the pitch Cranleigh opened the scoring wide out through their ‘gasman’ but they were kept at bay throughout the rest of the half, in no small part thanks to Owen Herbert and his tireless chasing back of the Cranleigh attackers. At the end of the first half RHS were able to hit back through a try from honorary Old Boy Mr Chadwick. With scores level at half time the Captain George Butt energised the tired troops. A delightful chip, chase and collect from Ben Moore fed Sean Cuddihy, who showed a clean pair of heals to score under the posts. Although Cranleigh hit back with a late unconverted try RHS hung on to the win by two points. A monumental effort and a trophy for the cabinet.

With great weather, superb hospitality, music and old friends it was a day to remember. Hopefully RHS Old Boys can look to build on into next year and take another team to defend the trophy. If you are keen to get involved please do get in contact via https://www.facebook.com/groups/RHSOBRugby/ or the RHSA directly.