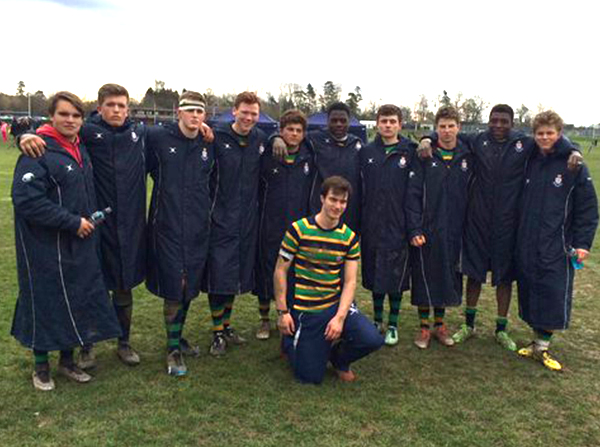 The Senior Sevens squad travelled to Reigate, in what has become one of the toughest and highest quality sevens tournaments in the country. With many of the South East power house schools competing in a field of 32 teams, there is simply not one easy group. RHS were placed in a group in which many had named a group of death, against Harrow, Hampton and Sutton Vallence. First up were Harrow in what proved to be a wake up call for the side, as they had a poor first half and allowed Harrow to get too far ahead and win 27-14. Harrow were the eventual tournament winners, but frustratingly RHS knew they could have beaten them.

Next up were Sutton Vallence who provided a stern test. However, RHS proved too powerful and ran away with the game in the second half to win 26-5. The final group game was against a very strong Hampton School and would decide who went through the group as second or third. Hampton scored the first try in the match but RHS always looked as though they had the edge and secured the game with a late try to win 21-12. As a result RHS went into the plate to face Reeds School in the quarter final.

With injuries and tiredness now starting to take their toll RHS put in a monumental squad effort and were, in the end, quite comfortable winners against Reeds, winning 24-17. Next up they faced Whitgift in the plate semi-final. Whitgift are a renowned school and started strongly, scoring a try after some early exchanges from both sides. RHS fought their way back into the game with some well taken tries. However, with injuries and tired legs, RHS werent able to hold on and lost 34-14. Whitgift went on to beat Portsmouth Grammar in the final and lift the plate.

All players in the 12 man squad contributed and so it is difficult to name any names. However, captain Fawaz O played and captained outstandingly throughout the day.

Only once in the past six years have RHS made the plate section and this year is the first time RHS have reached the semis. Well done to all.