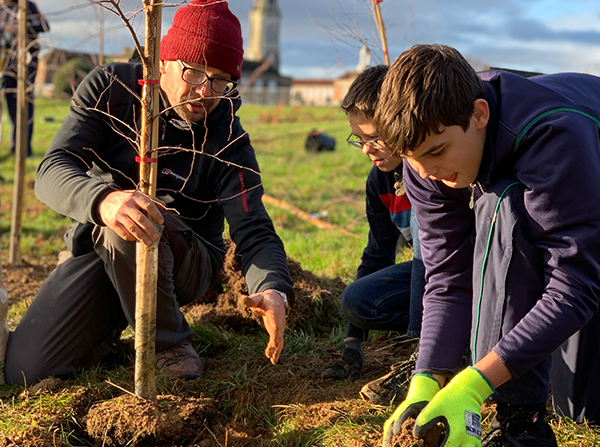 "Heart of oak are our ships, jolly tars are our men," - taken from Heart of Oak, march of the Royal Navy

Trees play a significant role at RHS in shaping the appearance and feel of the site. This includes a number of small copses, established hedgerows, parkland trees and a handful of fine specimen trees.

Perhaps the most prevalent is the oak tree (Quercus robur) which has a particular resonance given the school's maritime heritage. It is estimated that six thousand oak trees were used in the construction of HMS Victory as well as elm, pine and fir. Admiral Lord Collingwood is reported to have had a particularly keen interest in planting acorns to ensure the future supply of English Oak for replenishing the Fleet. In 1815, his widow honoured his final wish by planting 200 oak trees on the western bank of the College Burn, near Hethpool - one for every ship in the Royal Navy.

Recently, we have started planting hundreds of trees on the school site, both as a symbolic gesture to the 200 new pupils who join RHS each year but also as a commitment to maintaining and enhancing our very special site. When you ask our pupils what they most appreciate about RHS, for many it will be the vista over the Stour. However, this view is enriched by the trees that populate the fringes of our grounds. Some of these are held in particular esteem - the hollow oak by the football pitches is familiar to all RHS pupils.

However, as anyone who enjoys autumn in the UK will attest, there is also something significant in the value trees and woodlands have to us as individuals and is recognised in Japan through the habit of 'shinrin-yoku'. The Japanese government undertook a series of scientific studies, demonstrating time spent amongst trees could reduce blood pressure, lower cortisol levels as well as improve concentration and memory. They also found that trees release chemicals called phytoncides which have an anti-microbial effect on human bodies, boosting our immune system. As a result of this research, the Japanese government introduced 'shinrin-yoku' as part of its national health programme.

Planting trees is a win, win for everyone – the community who join together to plant trees and take pleasure in caring for them to the generations in the future who will enjoy the beauty they bring to the landscape. Most of all, planting trees is something everyone can do for the planet to ensure its sustainability.

"Every leaf speaks bliss to me, fluttering from the autumn tree" - Emily Brontë