We are proud to congratulate Toby R. on his completion of the 608 nautical mile Fastnet Race that he took part in over the summer, a challenging classic offshore yacht race. Royal Hospital School is a centre of excellence for sailing and it is an important part of our curriculum and heritage which we celebrate. Below is Toby’s report of his experiences:

The Royal Ocean Racing Club organizes four 600 mile races every two years, these being the Caribbean 600 around all the islands non-stop, the Fastnet from Southampton to the Fastnet Rock off Ireland and back, the Middle Sea Race from Malta around Sicily and back and finally the Sydney Hobart Race every Boxing Day. In 2017 the Fastnet was back on again and I joined a crew consisting of my Dad, six of his friends and myself sailing a J120, which is a 12 metre (40 foot) yacht.

To prepare for the Fastnet Race we had to take all the deadweight off of the boat i.e. all of the luxuries; such as, one of the cabin doors! After prepping the boat we did some training weekends, for this we went out to sea and tried to use all of the different sails we would be using in all of the races we were to complete. After a few training sessions and everyone getting to know each other, we had to complete some qualifying races, this included the North Sea Race (180 miles from Harwich to Scheveningen, Holland) and the East Coast Race (120 miles from Burnham-on-Crouch to Oostende, Belgium).

Both of these races were very interesting as they both had their difficult sections, which were good practice for the conditions in the Fastnet. An example of this was in the North Sea Race the wind dropped so much that instead of being dragged away from the mark by the tide, we decided to kedge (dropping the anchor) in the middle of the North Sea, which turned out to help us a lot because as the wind began to return we gained several places.

There were more challenges in the East Coast Race, where in the last mile to the line the wind completed disappeared and we had to use a special sail which created forward momentum from the rocking movement of the boat in the waves. In the end, after 119 miles of racing we crept over the finish line just before the wind died completely and the tide would have swept us away.

My role on the boat during the races was to trim the spinnaker on the downwind legs, and also to helm the boat on my shifts. I found steering very enjoyable, but I also liked being on the winch. 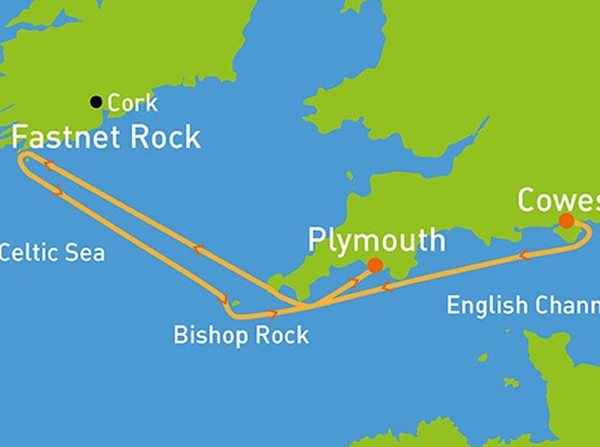 I think one of the most challenging parts of the race is being mentally prepared to wake up in the graveyard hours (02:00 - 05:00) for one of the shifts throughout the night. Also having to helm the boat down four metre waves, essentially surfing them whilst having to make sure the sails didn't collapse because if the spinnaker was to fail the likelihood of it ripping and ropes snapping becomes very high. The only unexpected thing to happen was at 03:00 on the second night when I was sitting in the cockpit and trying to stay warm, a wave crashed onto the boat and covered my whole body in water; a huge shock when it comes out of nowhere!

On the boat there were only five bunks for the eight crew to sleep in throughout the race. After the start at midday everybody was up on shift until 20:00 when we got a hot dinner, then the night rotations began which ran from 20:00 until 08:00 with the watches changing every three hours during the night. With eight crew it was simple enough to follow a four people on and four people off shift scheme which worked effectively. Then at 08:00 everyone woke up and had breakfast which was porridge for five days!

After breakfast the day shifts would take place, which became every four hours, this was the same concept for the night shifts (on and off after each break). The food varied throughout the trip, with sandwiches and soup for lunch, then a hot dinner every night. The trick to offshore racing is to never be hungry as that is when the stomach acids move around and then cause sea sickness. With it being my first big race I learnt from that mistake on the first day, but then realised just eating constantly will provide you with enough energy for the jobs you have to tackle in your shifts.

The most influential part of the experience I will take away and use in my life is an ability to mentally prepare for anything which might happen and to persist through everyday challenges. I know now that any jobs will be nowhere near as hard as what I've completed so I can overcome anything if I put my mind to it. Before this experience I had only dinghy sailed, which is similar in some aspects but very different in others. Now, I want to do the Fastnet Race again as many times as possible, hopefully on different boats which might be faster than the J120 I was on this time.

I also want to complete the three other 600-mile races which would all be amazing experiences that I look forward to completing in my life. Hopefully all this offshore racing will open up some doors into some other big races around the world such as the Volvo Round the World Race.

Overall, it was a very enlightening experience to try something out of my comfort zone and to push me to my limits physically and mentally. When we crossed the finish line it was a very special moment as we had a cannon fired as we finished rather than a claxon (first second and third normally get cannons). This was because one of the race officers is a member of our local sailing club in Woolverstone and was manning the finish line.

A personal highlight and funny moment was after the race had finish at 02:30 in the morning we tried to take the main sail down to enter the marina, as we attempted to take it down it became jammed so I had to quickly get the bosun’s chair, clip it onto a spare halyard then climb 15 metres up the mast and cut the shroud line to clear the jam for the main sail to drop - not something recommended to do in the middle of the night! 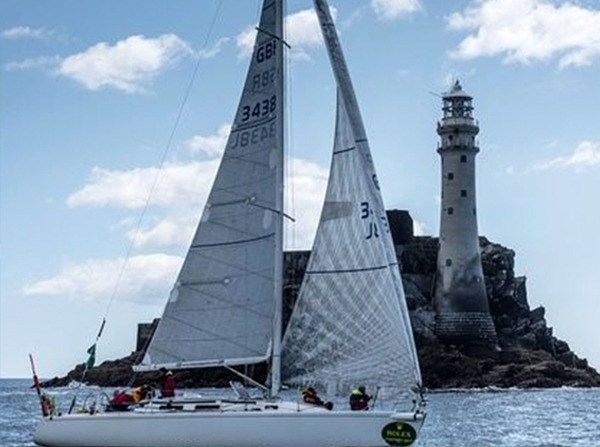