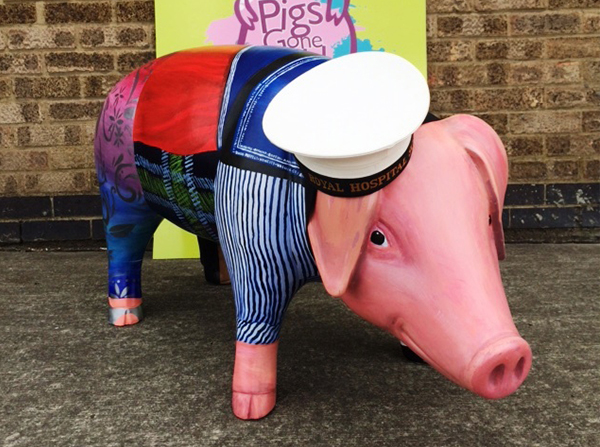 This summer RHS Art Scholars are taking part in Suffolk's largest mass participation art event in aid of the school's charity, St. Elizabeth Hospice. 'Pigs Gone Wild' will be an interactive sculpture trail featuring more than 40 pigs across Ipswich and beyond. It will be open from Monday 27 June to Friday 2 September and everyone will be able to follow the trail and collect points with the Pigs Gone Wild app. The trail pigs will be joind by a sounder of junior pigs decorated by local schools of which RHS is one.

RHS Art Scholars were invited to get involved with the 'Pigs Gone Wild' project in the Lent term. The artists met in March and began brainstorming themes and ideas for decorating their pig. There were a wide range of ideas put forward but in the end school pride won and the final design incorporated patched of a variety of uniforms and outfits that an RHS pupil wears throughout their time at the School.

They felt it important to feature unique and iconic elements such as the divvies collar and gidge, the bold red choir robes, CCF camouflage, the stripes of the Sixth Form shirts and the tartan of the school skirt, as well as the fun and sporting sides of school life with segments of a formal gown and a rugby uniform. The overall effect is a colourful and dynamic jumble of familiar and eye-catching elements of school life and a glimpse of the busy and productive nature of our student body.

A dedicated group of six art students, ranging from Year 9 to Year 12, began painting the design onto our pig after Easter. “Patches”, as the pig came to be known, was finished with two layers of varnish and adorned with its very own Gidge. The finished sculpture was on display at the Suffolk Show and will be in Ipswich town centre throughout the summer months, before returning to RHS in October where it will find its permanent home.

We challenge you to seek it out in the crowd and grab a photo with our signature swine! Job well done to Esme F, Zoe N, Alice C, Katie B, Holly P-A and Sophie A for their vision and hard work during this busy time of year.