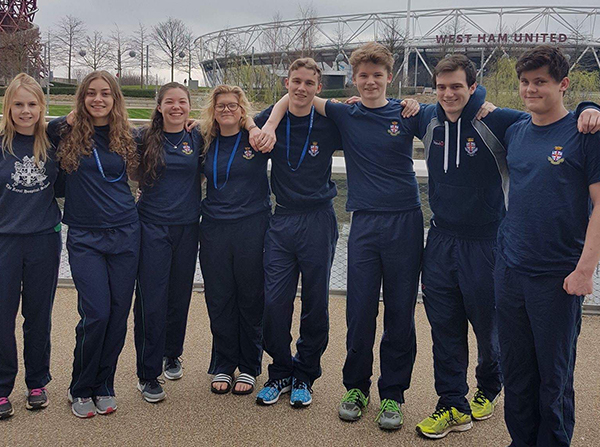 A team of eight RHS swimmers took part in the prestigious Bath Cup at the London Aquatics Centre, Olympic park, last week. This event has run for the last 95 years, with the exception of the war years, and girls' events were included from 1995.

The boys' team of Tom H, Toby A, Adam C and Jamie F were up against some very strong swimmers from 80 other schools and the girls team of Hannah D, Tilly A, Kyla C and Ami J were competing against 64 schools.

The girls started off with the freestyle relay and all swam well finishing a creditable 3rd in their heat; followed by the boys who put in a good performance in their 4 X 100m freestyle relay. The medley relays took place in the afternoon and Ami J swam a strong first leg of back-crawl where she touched first. The boys team had a great start from Toby but, with very strong competition in their heat, they finished 8th despite an excellent butterfly leg from Tom and good finishes from Adam and Jamie.

The swimmers had a great experience competing in a 50m Olympic pool against some of the best swimming schools in the country.