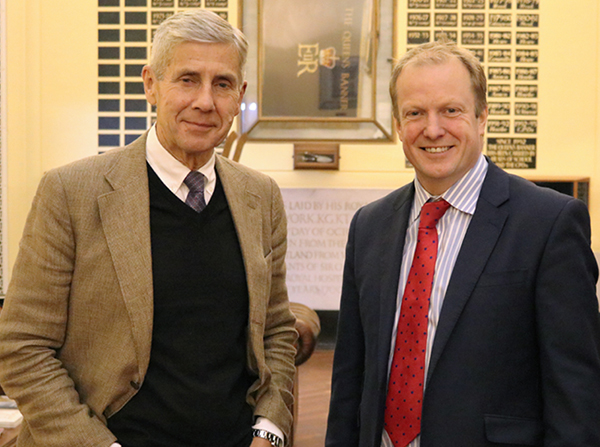 Last week the Royal Hospital School held its inaugural Careers Fair for Years 10 to 13. The keynote speaker was Lord Stuart Rose and the event was organised by Mr Chris Graham, Head of Sixth Form and Careers, who explained that the aim of the fair was to help pupils to navigate their own paths and find interests and skills that will unlock a broad range of career opportunities.

Mr Graham said: “Where will you be at 25? has become a familiar and repeated question here at Royal Hospital School as our Headmaster challenges pupils of all ages to think about their future and life beyond school. It’s ok not to know, it’s ok for your answer to change, it’s a journey and there are different ways for each of us to reach our destination. We do, however, believe that all our pupils should be searching for opportunities, broadening their experience and making active decisions as they progress towards their ultimate goal”.

In his opening speech, Lord Rose dispensed a fountain of valuable knowledge and advice harvested over a long and successful career. Despite starting out on a path towards medicine, Lord Rose changed tack and has worked all of his life in retail. He started out with Marks & Spencer in 1971 and from 1989 he went on to positions within The Burton Group, Argos, Booker and Arcadia. He returned to Marks & Spencer in 2004 as Chief Executive and became Chairman in 2008. He left M&S in 2011 and is currently Chairman of Ocado, Fat Face, and Oasis Healthcare Group and a Non-Executive Director of Woolworths (South Africa). Lord Rose was made a life peer in September 2014.

“The roots of education are bitter, but the fruit is sweet” – Aristotle

Lord Rose’s words reflected the School’s ethos as he urged pupils to find out what they were good at and pursue what makes them happy - which he believes is the basis of success. He encouraged them to seize opportunities and to remain open-minded, approachable and willing to take risks that could lead to rewards. He said that when he was younger he wouldn’t have known where he would be at 25 but he worked hard and used his youth and energy to open doors.

Reflecting on his own career, he shared how planning and ambition is useful but said that in reality things often happen by accident, through luck or emerge unexpectedly. He did, however recognise a correlation between how hard he worked and how ‘lucky’ he was! His advice focussed on being happy; working with people or something that you like. He told the audience that many young people just starting out claim that they want to be a CEO but he warned that it wasn’t all it was cracked up to be! There are many positions in companies that are just as fulfilling and offer a good work/life balance that you might be better at or enjoy more.

On the topic of money, his belief is that how much you get paid is not necessarily the measure of success; if you work hard, actively engage with people in your workplace and challenge yourself, the money tends to follow you anyway.

Inspired by Lord Rose’s address, the pupils left the Assembly Hall to explore and question guest presenters from a vast range of career backgrounds. Some of the sectors represented were:

In closing, Mr Graham said, “We were delighted with the success of the Careers Fair. The sessions were incredibly useful in allowing pupils access to a professional in a field they are interested in and to be able to ask questions about the rewards and drawbacks of their day to day jobs, as well as how to get on different pathways to access that career. We are incredibly grateful to Lord Rose and our guest presenters for giving up their valuable time and sharing their insight”.