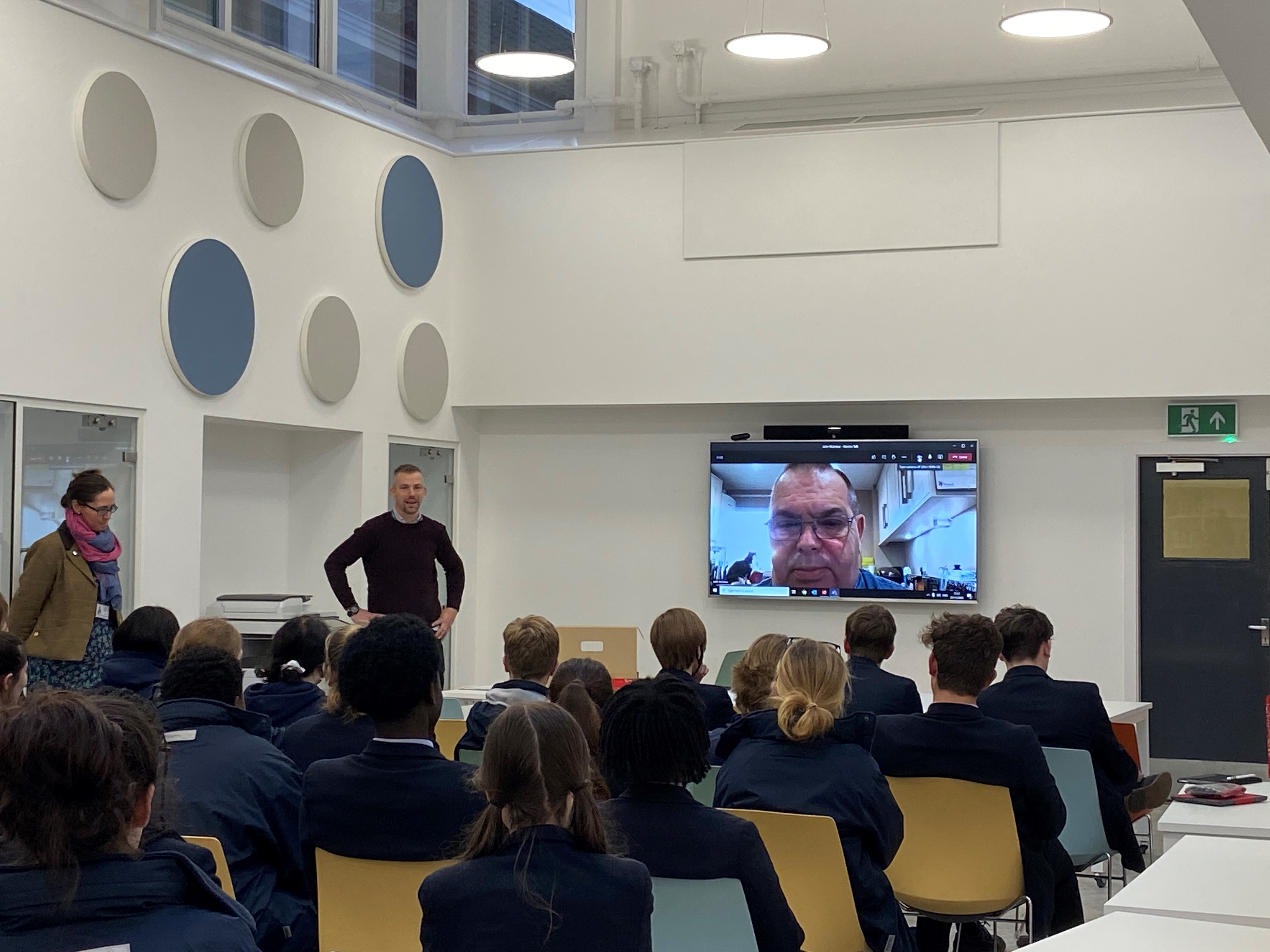 It was a real pleasure to welcome John McIntear (Anson 1974) back to RHS for a 'Virtual' Fireside Chat. Despite the event taking place in the Richards Library rather than the fireside at Holbrook House, there was plenty to chat about.

Welcoming John were the pupils of the RHS Service Crew who give time to others in order to make an impact in the community.

Following his diagnosis of terminal lung cancer in June 2018, John has become well known in the media as a champion of disabled officiating in able bodied sport. John is a former Royal Navy Fleet Air Arm veteran, a huge cricket fan and someone living his best life despite terminal illness and disability.

For what would be a crushing blow for many, John got busy fulfilling his ambition to be one of the first disabled sports officiators of able bodied sport. John feels strongly that this 'glass ceiling' has not caught up with other efforts to bring about a more just and inclusive society. Key to this was a fundraising drive supported by the Royal British Legion to provide him with a specialist wheel chair, which he explained to pupils was like going from the Tea Cup Ride to a Wurlitzer combined with the Wicker Man at Alton Towers! The pupils, all of whom had played a part in helping the School raise nearly £2,700 for the 2020 Poppy Appeal, got to see first hand the difference giving back makes. John thanked all RHS pupils and staff for their outstanding contribution.

The central theme of John's talk was confidence. In speaking to the pupils John developed a nice turn of phrase that, whilst particular to his efforts around cricket, can be applied metaphorically to pupil confidence:

I could have spent the rest of my life walking round the boundary. Instead, I wanted to get back in the middle and make a difference

John's conversation with pupils, ranging from his specific experience of 'being outside the boundary line' to how he turned a negative into a positive can be applied to the many challenges pupils face as they set about making their mark on the world, be it personal or professional.

After making sure he had told everyone that Anson is the best House (and he was delighted to see some Anson girls raising their hands), John and pupils also explored his time at RHS. John explained how he had developed a passion for sport which helped him immensely, given it wasn't until later in life that he was diagnosed with the dyslexia and autism that had made the academic side so challenging for him.

Pupils asked him who his favourite Cricketer was (Ian Botham!). As to why cricket and why officiating? John felt strongly that cricket is an intelligent game and that nothing takes you closer to the heart of the action than umpiring i.e. 'stepping into the boundary line'. Another interesting question was whether John was well behaved at RHS, to which he gave a wry smile and let the pupils know his nick name was 'MouthIntear' and that they were fortunate to be at RHS in an age where personal responsibility has replaced severely imposed discipline.

John hopes to come back in the summer to officiate some RHS cricket. We can't wait to meet him in person.