It has been great to see the rugby fields busy and awash with boys playing rugby again, and to see the thrill, excitement, and tension on game days. This term has seen every boy in Year 7 and 8 representing RHS in rugby fixtures, as well as almost sixty boys in Year 9 alone donning the green and navy-blue hooped jersey in matches too. Overall, more than two hundred boys have done the school proud in almost one hundred and twenty matches through the season. This is a phenomenal number, given that there have been no rugby fixtures in over eighteen months and one which the rugby coaching group are very proud of.

RHS continues to have strong links with Northampton Saints. It has three boys involved in the U16, U17 and U18 squads respectively; as well as 5 boys in the U14 DPP squad, which augurs well for the future. More recently, five senior boys have been included in the U18 Lambs Rugby Training Squads and we wish these boys well over the coming months as they strive to represent the National Lambs Team. 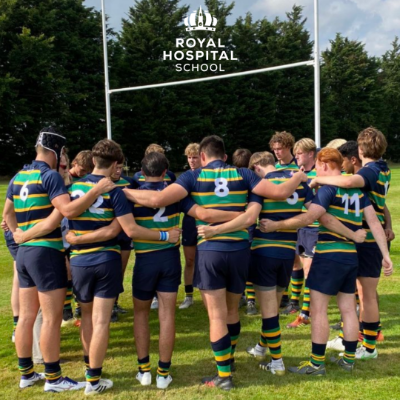 On top of this RHS 1st XV has produced an unbelievably stellar season, and one that is arguably the best in the history of the school. The 1st XV has remained unbeaten throughout the season, putting in some memorable performances against traditional 'big hitters', Haileybury School and Felsted School. These two wins meant that 1st XV has been nominated three times in the NextGenXV top school performers of the week in the country, while also featuring as one of the ten matches to watch in the final match of the season against local rivals St Joseph's College. This was a fantastic finale to the season, with the team saving their best performance for the last match with an emphatic victory. 1st Team coaches, Nick Platt and Steve Eales, have remarked that the style of play seen by the boys this season has been as impressive as their results and that the Year 13 boys signed off their rugby playing days at RHS in the perfect way, having lost only one match in their school careers since Year 7.

The rugby boys will now look towards the 7's season with optimism and excitement, with the prospect, but some very hard work will be required, of some silverware in their various competitions over the Lent Term.

Quote by NextGen XV reviewing the end of 2021 season;

"Equally glorious has been that of Royal Hospital School and one Saturday they finished it all off in style with a stunning 52-12 away win at local rivals, and school rugby powerhouse, St Joseph's College. 53% thought they would do the job but none could have predicted that margin, surely. It was an incredible end to what has been an even more incredible season, one that has seen them go through the year unbeaten and taking down some of the biggest names in the area. An incredible job from Royal Hospital School!"