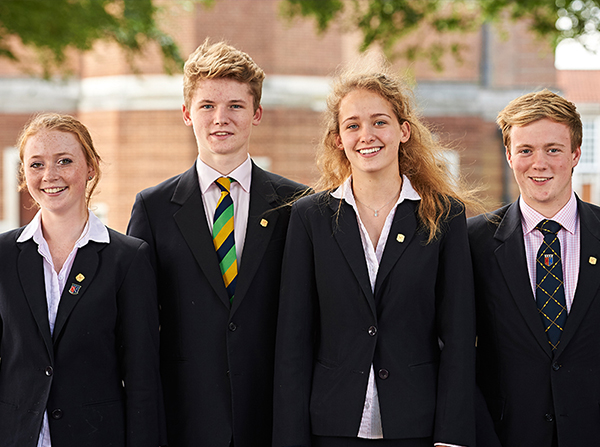 Heads of School step up to the challenge

Heads of School at the Royal Hospital School are stepping up to the challenge as they enter the second half of their first term in post. The four; Tom Heley, Lucy Watson, Freddie Braybrooke and Natasha Scott, are all boarders and in their seventh year at RHS.

The Headmaster, Simon Lockyer, said “Leadership is one of the 7 core values that underpin the Royal Hospital School’s foundation and a quality we look to develop through sports captains, peer mentors, House prefects, Head Choristers, the sacristans, the Guard and Band and the Combined Cadet Force (CCF). At the top, our Heads of School play a crucial role in the leadership of the pupils and I am delighted with how this year’s incumbents have performed in setting the tone for the year ahead.

The prefect selection and induction process is thorough and includes a series of interviews and assessments held at the end of Year 12 supported by references from their teachers and nominations from their peers. Lucy, Tom, Freddie and Natasha have already shown extraordinary commitment and maturity in their roles and have taken on an enormous responsibility for the day to day routine, provided an invaluable conduit for information as well as providing an example to the pupil body.

Their role is to lead by example but also to consider the legacy they wish to leave, be it through the initiatives they implement or the small acts that leave lasting impressions on other members of the school community. They have addressed the whole school and have had experiences that are truly unique to the Royal Hospital School such as carrying the Queen’s Banner through St Paul’s Cathedral and leading in HRH Princess Anne.”

On leaving school, both Tom and Lucy plan to study degrees in Politics and International Relations at Durham and Southampton respectively while Freddie and Natasha are seeking careers in the armed services after studying at university.