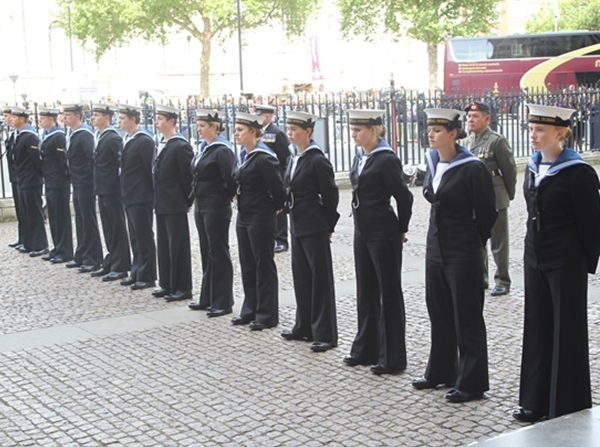 Sir Christopher Benson, Chairman of the Britain-Australia Education Trust, praised the RHS pupils who provided the Guard of Honour at Westminster Abbey over the summer at a memorial service for former pupil and founder of New South Wales, Admiral Arthur Phillip.

"It will not have escaped anyone's notice that the only uniforms in Westminster Abbey on the 9th July were those of the Second Sea Lord Vice Admiral David Steel CBE and the Guard of Honour drawn from the Royal Hospital School wearing a uniform that I was once proud to wear.

The reason for no other uniforms was that His Royal Highness' Private Secretary confided to me that Prince Philip would welcome not having to get in and out of the kit!

It was the suggestion of Sir Michael Savory that pupils from the Royal Hospital School should be involved in the memorial service for Admiral Arthur Phillip who was himself a former pupil of the School.

The first idea of the Abbey was that the pupils should assist as ushers but I was sure that HRH would really welcome such a Guard of Honour. Which he did! So it was a delight to meet some very smart smiley young people in Westminster Abbey that morning.

These young people not only looked good and well turned out, but also showed considerable confidence and compose in a pretty daunting environment. They joined in the post-service reception and mingled with some of the pretty high-powered guests.

I hope they enjoyed the occasion as much as we enjoyed having them with us. A great example of a school to be proud of. Thank you!"