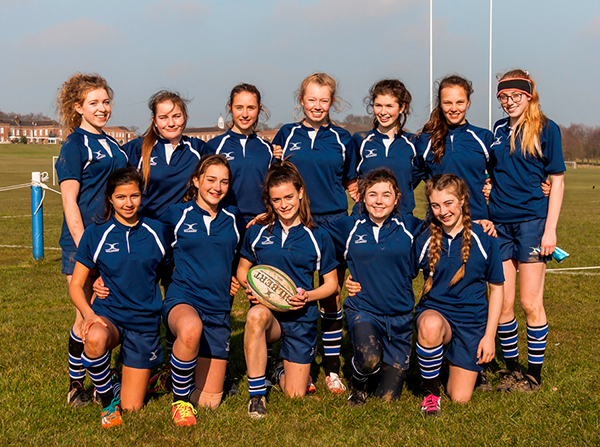 With pitches at Colchester Rugby Club waterlogged, the Royal Hospital School stepped in to provide a venue for the Northampton Saints U-15 Girls’ 7-a-side Rugby tournament, sponsored by Elite Insurance on Friday 11th March.

In glorious spring sunshine the girls enjoyed an afternoon of some fiercely contested rugby. The Royal Hospital School team, ably captained by Josie Ruffles, played their most outstanding rugby of the season, raising their game in all areas in the face of well-drilled and more experienced opposition. Every girl threw herself into the most uncompromising of tackles and played with exceptional spirit despite some bumps, bruises, scrapes and cuts. Mollie Entwistle, Bella Keeley, Izzy Butler and George Nicholls all scored outstanding tries. George’s drop-kicking improved throughout the tournament and Catie Bennett’s excellent tackling stood out. The entire squad played their hearts out and each of them enjoyed at least one moment of glory including a heart-stopping run by Morgan Thomas; a try-saving tackle by Charlotte Stenning and superb support, tackling and passing from Maddy Chesterman, Ruby Parker, Thea Chavasse and Charlotte Hoskyns.

The tournament was won by Copleston High School, with County Upper School as Runners Up. The RHS girls won two of their six matches and finished 3rd with a total of 16 tournament points.