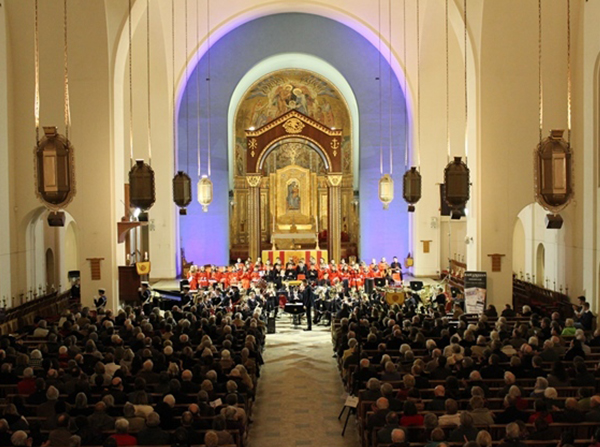 “Having performed in three Gala Concerts at the Royal Hospital School, I have to admit that this years was the best! Featuring the School's finest musical groups, it was a night full of talent, passion and dedication.

The Concert started off with a dynamic fanfare from the Brass Ensemble, under the direction of bandmaster, Mr Harvey. Though a small band, they ensured to grasp the audience from the very first note to set the bar high. Next, the Chapel Choir performed three contrasting pieces. The highlight was Will Todd's Exalt Us In Your Love a contemporary piece amongst the other traditional church music. As the piece was specially composed for the School's 300th anniversary, it held great sentimental value for many – performers and audience members alike. This gentle, emotional piece truly presented a different side to the choir.

After performances by the Chamber Choir and Orchestra, the Brass Ensemble, alongside sixth former Ben Banks on the organ, left the audience hanging at the end of the first half with a powerful rendition of Leon Boellmann's Toccata from Suite Gothique. Pupils are, no doubt, used to hearing this signature piece on the organ, but with brass, the accompaniment complimented the organ with great dramatic effect.

The newly-formed Big Band started the second half of the Concert, adding some upbeat musical swing. Sixth former Simone Rossouw reprised her outstanding solo in Sondheim's I'm Still Here from the recent BBC Big Band concert, this time with the RHS Big Band. Although most of us found the music quite challenging to play, we thoroughly enjoyed it. After all, to live up to the BBC Big Band was no easy task.

Finally, the Concert Band performed an exciting mix of military and contemporary music. The Best of the Beatles was responded to with thunderous applause from the audience; the rock medley took them on a journey through time; and it was fantastic to see so many members of the band having a chance to shine with solos scattered throughout the piece (including myself!).

The Gala Concert ended with Mr Harvey's composition, Am Sailing to Westward. Our Head of Ceremonial, Mr Griffiths, narrated the tragic events of the sinking of HMS Trinidad on which the piece was based. Members of the Ceremonial Guard marched on and the whole performance established a strong sense of the School's naval heritage.

On behalf of all the performers, I would like to thank Mr Saunders – our Director of Music, Mr Harvey – our Bandmaster, Miss Reidy – conductor of the Chamber Choir, Mr Cantrill – our organist and all other members of staff that helped to organise and ensure the smooth-running of the concert. We deeply appreciated the opportunity to perform and share the joy of music.”