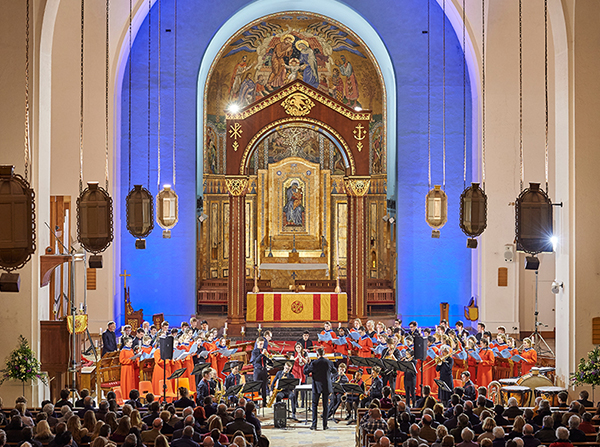 On Saturday 4 March 2017, over 150 pupils took to the stage for the annual Gala Concert in aid of the Suffolk Community Foundation, Bikeactive, Mencap, The Woolverstone Project and the Riding for the Disabled Association.

As the buzz of the packed chapel audience gradually died down, the evening’s entertainment got under way with Andrew Cantrill-Fenwick’s beautiful new arrangement of Thomas Tallis’ sixteenth century Canon. The cavernous acoustic and ethereal atmosphere was enhanced by the use of hand bells as the school’s Chapel Choir processed serenely into the Chapel, led by the Director of Music, William Saunders, before bursting in a rousing rendition of Jonathan Dove’s Gloria. Works from the Music School’s patron, John Rutter and Ralph Vaughan Williams followed, the latter featuring Year 13’s Ben Banks as vocal soloist.

Next up was the Brass Ensemble, who further lifted spirits with an energetic account of Osterling’s concert march Bandology, followed by the student led vocal group ‘Concept’, who brought the audience right up to date with Alex Clare’s 2011 hit Too Close. The final act of the first half saw the Big Band demonstrating their versatility with two contrasting numbers; Mercy, Mercy, Mercy arranged by Jools Holland’s saxophonist and friend of RHS Derek Nash, and the classic Glenn Miller crowd-pleaser In the Mood, featuring solos from Saffy Henley, Viktor Kromm, Alex Gray and William Christmas. For their third item they joined forces with the choir for a bit of fun in the guise of the traditional American gospel hymn O When the Saints go Marching In, featuring Joe Gray on trombone, and Mr Saunders leading Count Basie style from the piano.

The opening piece of the second half conjured images of the desert of the Middle East, with Rebecca Ashton-Beck performing Sands of Kuwait for her final appearance on bagpipes before leaving the school, followed by the school orchestra, led by Freya Tai, performing two classics from their ever-expanding repertoire; March from Bizet’s Carmen, followed by Mascagni’s Cavelleria Rusticana. As the instrumentalists left the performance area to appreciative applause, the Chamber Choir took their places, and under the direction of their conductor, Andrew Cantrill-Fenwick, impressed all with their renditions of Ubi Caritas by Gjeilo and Battle of Jericho, stylishly reworked by the American composer and arranger Moses Hogan.

Finally it was time for the Concert Band, and under the baton of Bandmaster Richard Harvey, the 50-piece ensemble gave a brief but eclectic snapshot of their current repertoire, including the opening theme music from the film The Incredibles, a march sequence featuring the Corps of Drums and the perennial Sousa favourites The Thunderer and Stars and Stripes Forever.

The evening’s Grand Finale was exactly that, with the band and grand organ joining forces for the Finale from Camille Saint-Saen’s epic Organ Symphony. Raising £2,500 for local charities, the Royal Hospital School’s Gala Concert once again clearly demonstrated the wealth of talent amongst the pupils and the wide and varied musical opportunities available to them.