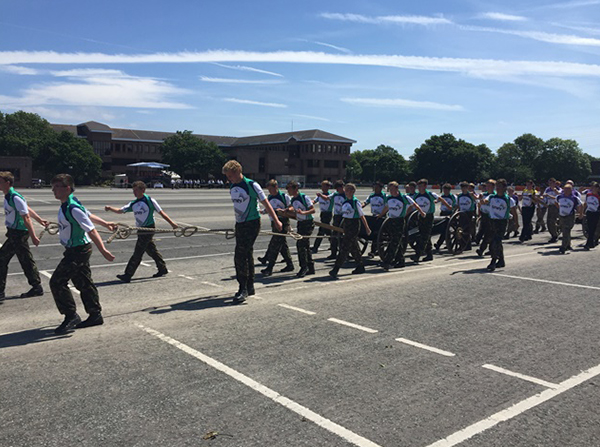 The Royal Hospital School entered a young but enthusiastic team into the Junior Leaders Field Gun Competition held at HMS Collingwood in Gosport, Portsmouth, on Friday 8 July. After a week of training and tough competition on the tracks, the boys and girls, aged 16 and 17 years, were part of a closely fought final against a team of Scottish-based Able Seaman trainee submariners.

Lt Cdr (Retd) Nigel Griffiths QGM, Head of Ceremonial at the Royal Hospital School, first ran the Royal Navy Brickwoods Field Gun competition in 1983 and has been an avid competitor in, and supporter of, this Royal Navy competition. Since 2007, the Junior Leaders Field Gun competition has enabled young men and women between the ages of 16 and 24, both within the Armed Forces and from the wider civilian community, to develop their self-esteem, personal discipline, fitness, and team work ethic.

The event has continued to grow in popularity from 5 crews in 2007 to 17 crews of 340 young people in 2010. This year 41 crews applied for just 18 places and the Royal Hospital School were delighted to secure a position to take part in the prestigious, yet arduous, competition.

Training commenced at HMS Collingwood on Monday 4 July and the pupils also enjoyed a “Meet the Royal Navy” experience when not on the track. Accommodation was on board HMS Bristol in Portsmouth and the evenings were taken up with presentations given by the Royal Navy, social events and sport fixtures.

Nigel Griffiths said, “I have been very keen to introduce RHS pupils to Field Gun. The drill is modified from the Royal Navy Field Gun competition but the same traits are required of courage, commitment, discipline, respect for others, integrity, and loyalty. Everyone associated with this Junior Leaders Field Gun Competition recognises the incredible developmental benefits it offers.

Each crew of 18 highly disciplined, motivated, and physically fit field gunners, race to assemble an antique field gun and run with it, disassembling and reassembling as the competition requires, before dramatically dragging the gun home.

Our pupils did superbly and deserved their place in the final against a much older team. We will of course be pitching for the pole position next year”.