RSS Feeds Subscribe to Alerts
Fall of The Wall 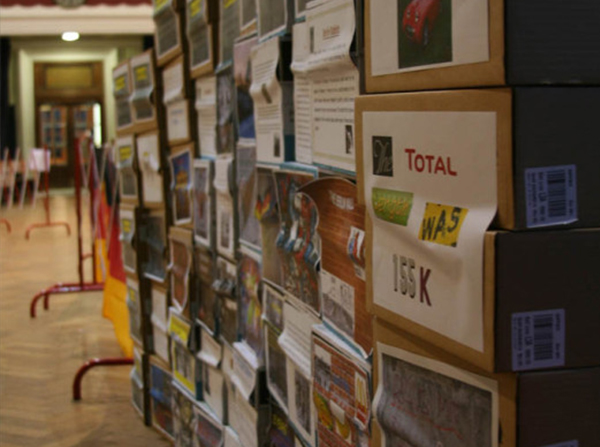 Pupils mark the anniversary of the fall of the Berlin Wall

On Tuesday 11 November Year 8 German language pupils built their own Berlin Wall across the East-West divide in the assembly hall. The wall included facts about why the Wall was built, the differences between East and West along with its demolition. They then went on to knock down it down to celebrate the 25th anniversary of the fall of the Berlin Wall.

The night of 9 November 1989 was full of excitement as East Berliners poured across the newly opened border points, curious to see what it was like on the other side of the Wall. Some sank their teeth into a Big Mac for the first time, whilst others sipped from their first can of real Coca-Cola. Almost all were wide-eyed with amazement at the range of goods on offer in West Berlin's supermarkets. The Western world beckoned, with the prospect of freedom of travel, freedom of expression and crucially, democracy.

On when we were remembering our fallen at RHS, German Chancellor Angela Merkel said that the fall of the Berlin Wall 25 years ago was a message to a conflict-torn world that “dreams can come true”. Merkel, 60, who grew up in the East, said: “The Berlin Wall was a symbol of state abuse, cast in concrete, that took millions of people to the limits of what is tolerable, and all too many beyond it. It broke them. Little wonder that after the border opened, people took apart that hated structure with hammers and chisels.”

The message of the fall of the Berlin Wall is that we can change things for the better. This is true wherever you are in the world be it in Ukraine, Syria, Iraq or any other regions of the world where liberty and human rights are threatened or being trampled. The fall of the wall inspires hope that the world can tear down “walls of dictatorship, violence, ideology and hostility”.

Germany and Berlin celebrated the 25th anniversary of this event that symbolised the end of Cold War division by throwing a huge open-air party at Berlin’s iconic Brandenburg Gate. More than a million people gathered in the reunited capital; many flocking to see rock stars and political dissidents on stage amid fireworks to recall the peaceful breach of the despised barrier.

The ugly scar the Wall once cut through Berlin was marked by an art installation, with a string of nearly 7,000 illuminated white balloons. The balloons were released as a symbol of peace, light, hope and freedom and they floated into the sky to Beethoven’s “Ode to Joy” (the anthem of the European Union) and the unofficial Wall anthem “Heroes”, by David Bowie.

The Berlin Wall was brought down not by the force of bulldozers and armies; it was torn down by the power of ideas and whilst celebrating the fall of the Wall, we should recognise and respect intellectuals, artists and activists who nurtured these ideas, sometimes at the cost of their own lives and freedom.

The collapse of the Berlin Wall has become a very strong symbol of unity and of the values of democracy, liberty, human rights and the rule of law.