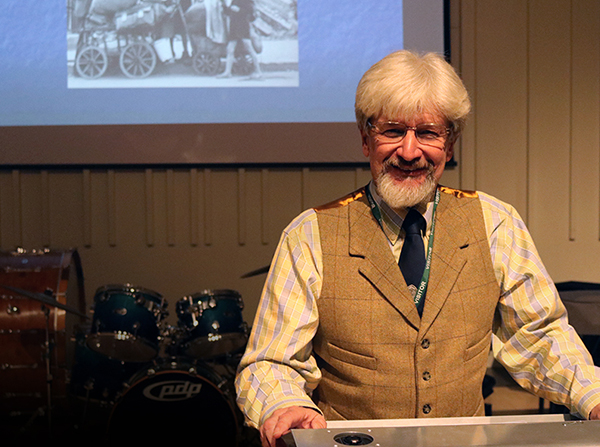 The RHS Amnesty Group hosted a thought-provoking talk on ‘Children the Invisible Victims of War’ by Dr Martin Parsons on 31 January.

Dr Parsons is the leading international expert on the topic and has published a number of books about child evacuees and war children including I’ll Take That One and War Child. Children in Conflict. He also edits the Children in War journal and has contributed to a number of TV programmes including Britain at War in Colour. His current research is based on helping the British armed services manage support for ‘service children’ whose parents have been deployed to war zones.

His talk focussed on the long-term effect of evacuation during World War Two, as well as exposing some of the myths around the topic. It was interesting to hear that 50% of the evacuees were middle class children billeted on mainly agricultural working class communities, rather than the generally received wisdom of mainly working class children being evacuated to a middle class life in safety. It was also surprising to hear that the effects of being a war child takes three generations to dissipate, alongside some really moving first-hand testimony.

Dr Parsons also discussed how best to support current war children coming to the UK from war zones such as Syria. An engaging question and answer session ended the talk, which was very well received.

Sixth Form pupil, Sally Watson said “This emotive topic, accompanied by the professor’s own stories of those he had met, left an impression on those who attended. RHS was privileged to host a man with such vast personal experience of working with children suffering as a result of war. Many thanks must go to both Ms Nicholls and Mr Watson-Davis for helping to organise such a thought-provoking talk.”