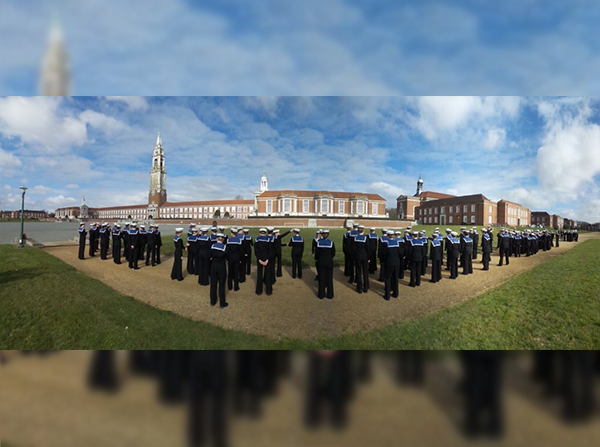 Sunday 20 March saw the first Divisions of 2016 go off without a hitch. This first Divisions was followed by the Confirmation Service and the Inspecting Officer was Surgeon Commander (D) B Smith BDS MGDS RCS Ed MSc RN SO1 Dent Pol & OCM.

Surgeon Commander (D) Smith is currently based at Navy Command in Portsmouth as the Career Manager for RNDS. Having qualified as a dentist at the University of Dundee in 1985 he gained experience in Community Dentistry and General Dental Practice before setting up his own practice. During this time he took on a part-time commintment to provide dentistry to Commachio Group Royal Marines based at RM Condor. His involvement with the Royal Marines inspired him to sell his practice and hoin BRNC Dartmouth in September 1995 as Surg Lt Cdr(D). This led to him joining the Second Submarine Squadron as the Squadron Dental Officer and has since served aboard the HMS Northumberland on STANAVFORMED duties.

After a year of higher clinical training in Periodontology at Eastman Dental Institute, London he was appointed as clinical director of the Dental Training School, Aldershot and in April 2016 he will be taking up the Senior Dental Surgeon role in HMS Nelson.

This year's Confirmation Service was led by the Right Reverend Mike Harrison, Bishop of Dunwich with 23 candidates being confirmed in the School Chapel.

The Right Rev. became Bishop of Dunwich on 24 February 2016 following 10 years as the Director of Ministry and Mission in the Diocese of Leicester.