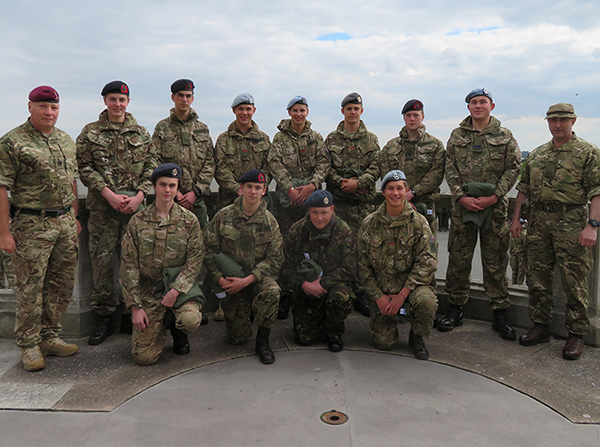 The Royal Hospital School Shooting teams have achieved a historic victory at the ELEY Cadet Country Life Shooting Competition triumphantly winning 1st and 3rd place, a feat that hasn’t been accomplished by the school for over 50 years. Competition records stretch back to 1912 and the last time RHS lifted the trophy was is 1963.

Over 100 schools across the country prepare every year by vigorously training for this varied and tough event and honing their skills on the service issued .22 rifles. There are four rounds or series, each designed to test different shooting techniques and scenarios; grouping, rapid, snap shooting and landscape.

Series 1 is Grouping, which sees two sighting shots then adjusted so the smallest five round group can be shot on the next target. A 12.5 mm group scores 25 points. Series 2 is the Rapid, where the firer shoots ten rounds at two targets, five in each, in 60 seconds. This requires speed to unload and reload but also a calm trigger finger to score a maximum 40 points. Series 3 is the Snap shoot where the firer receives five three-second exposures of a small target and must fire one round at each. 30 points are on offer here but difficult to acheive due to the size of the target. The firers shoot these details back to back with no rest apart from targets being changed. A maximum of 95 points is available.

Series 4 is the Landscape shoot which is where a team member studies a picture from 25 yards with and without a scope to identify four 25mm circles which they must direct firers onto using reference points and a Fire Control order. The team cannot use a scope so they are relying on the good direction and use of recognisable features to enable them to shoot and score well. Each individual can score a maximum 30 points with three rounds.

The RHS 1st team were congratulated by the judges for only dropping 16 points in Series 1-3 giving them a solid lead that saw them to victory despite a tricky Landscape round, three points ahead of runners-up Fettes College CCF.

Individually, 6 out of 7 of the top fires in the competition were from RHS with Harry B-K and Hamish R coming joint 1st closely followed by Josh M in 3rd.

Over 80 cadets tried out for a place on the prestigious team back in September and were whittled down to 12 pupils who went on to further training supervised and coached by WO1 (RSM) Karl Weaver and Shaun Hawkins who must also be thanked for their hard work. The pupils will receive their gold and bronze medals respectively from Bisley in the coming weeks as well as the school proudly holding the Country Life Shooting trophy for the year.