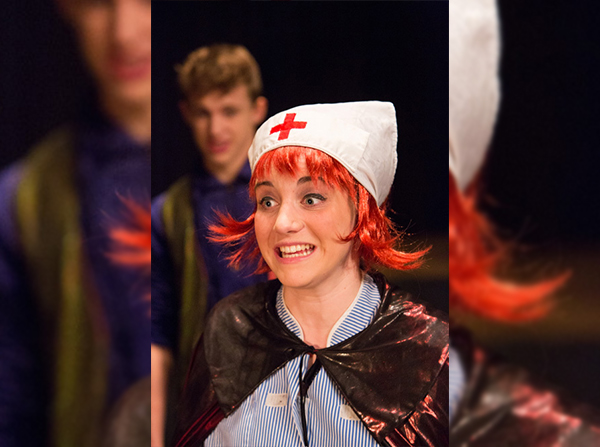 A talented troupe of pupils from the Royal Hospital School took to the stage in Comic Potential, an intriguing play based around the sci-fi concept of robots performing on television as android actors.

Alan Ayckbourn's robo-centric comedy first appeared on stage in Scarborough in 1998. This weekend, is was re-created by a cast of Royal Hospital School pupils led by Rosy TM, who stars as Jacie, an actoid caught between her programming and her wholly more human talents.

Jacie's existence as a supporting actress in the torrid soap of washed-up director Chandler Tate is turned upside down when she unwittingly draws the affections of the naive Adam Trainsmith, the nephew of the television stations owner. Adam impulsively decides to run away with Jacie, a decision which pits Tate and his technical crew against villainous station controller Carla Pepperbloom in the race to track down Jacie.

Will F (Adam), Matt A (Tate), Katie T-B (Pepperbloom) and George R (Marmion Cedilla) also give excellent performances as the leads of a cast who display great collective ability. The actors and actresses are supported by ambitious set design and enchanting costumes you can't conceive of a colour which doesn't appear at some point in this production.

Head of Drama, Damon Kerr, said, "The Royal Hospital School is proud of the focus it places on drama and the progression of several of its pupils into amateur theatrics and professional employment. This performance of Comic Potential blended seasoned performers with several starlets making their first appearance in a senior production, and displayed a wealth of talent to enjoy now and in the future."