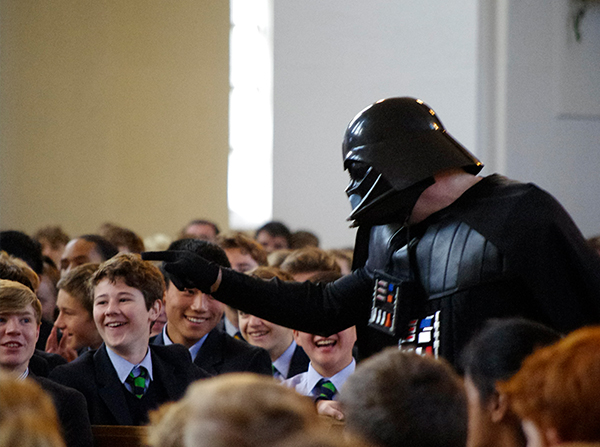 Well, you may have been wondering for some time who is the real Dark Lord of the Sith at RHS? Is it the Headmaster? No. Is it Mr Dixon? Surprisingly, no. Could it be nice Mrs Godfrey, hiding behind Wellbeing Week? Unfortunately, no. I can confess that it is, in fact. . . not me, although wouldn’t it be great if it was? So why have I dressed up as Darth Vader this morning, apart from the fact that it gives me the chance to ruin my sons, Sam and Will’s, day by being able to reprise Darth Vader’s most famous line, that from ‘The Empire Strikes Back’: “I am your father. . . search your feelings, you know it to be true”. It was also a great opportunity to have Mr Harvey’s Brass Ensemble play the Imperial March to come into this morning and they will be playing us out, along with Mr Cantrill on the organ, with more Star Wars music at the end. Many thanks to all of them. I wish I could have had the four Heads of School come into chapel in storm-trooper armour as my escort, but you will just have to imagine that!

There are four reasons why I have picked Darth Vader as my theme this morning. Firstly, I hugely enjoyed Mrs Mann’s chapel talk last year – ‘How to find Happiness after Star Wars: Episode VII’ – in which she analysed much of the good advice given by characters such as Master Yoda. It got me thinking about the Star Wars cinematic universe and its relevance to us at RHS. Secondly, I am a huge Star Wars fan (although I never dressed up in Star Wars costume before – honest!) The original film (or ‘Star Wars Episode 4: A New Hope’ as many of you will know it) was released in Britain in late December 1977 when I was 10 years old. My uncle had seen it in the USA and he had told me that this extra-ordinary film was coming out in Britain. He then took me to see it on the second day of release at Leicester Square and I have been a die-hard Star Wars fan ever since. As you know, the film starts with a rebel spaceship fleeing into view and being pursued by an enormous Imperial Star Destroyer. It filled the entire screen and it seemed like the whole cinema actually shook. Wow! This was back in the day before surround-sound was common and there was no CGI. It was the first film of its type and we were all utterly blown away by the story, the costumes, the lightsabres, the effects and, above all, by Darth Vader in his full black armoured suit and mask, towering above the other characters (in a way that I cannot)! Not surprisingly since then, Darth Vader has been rightly placed in the top ten of every list of villains and movie characters. He is malevolently magnificent: choking those who displease him with just the use of the Force with lines such as “I find your lack of faith disturbing”. Who can forget that other line to his son, Luke: “You underestimate the power of the Dark Side” and to Obi-Wan Kenobi: “We meet again at last. The circle is now complete; when I left you, I was but the learner; now I am the master”? He is the ultimate anti-hero and so much more gripping than naïve Luke Skywalker, feisty Princess Leia, streetwise Han Solo or even the cute droid, R2 D2. Darth Vader is the linchpin of the original three films, the central character of the three prequels, and it is he who has inspired his grandson, Kylo Renn, and the First Order in the most recent film, ‘The Force Awakens’. The next film in the Star Wars franchise, ‘Rogue One’, is released this December and, guess what, Darth Vader will feature once again! It wouldn’t be Star Wars without him.

The third reason is that there is a major RHS connection with Darth Vader. Bob Anderson was a pupil at RHS in the 1930s and was in Raleigh House. Bob had learned to fence at RHS and he went on to win the gold medal in the 1950 British Empire Games and came fifth in the team sabre event at the 1952 Helsinki Olympics. He went on to become the first official British national fencing coach and then President of the British Fencing Association. He also had an extra-ordinary career in film. He coached and choreographed the sword-fighting scenes for Errol Flynn, the most famous swash-buckling actor of all time! He choreographed fight scenes in very many movies such as the Bond films ‘From Russia with Love’ and ‘Die Another Day’, as well as ‘Highlander’, ‘The Princess Bride’, ‘The Three Musketeers’, ‘The Mask of Zorro’, the ‘Pirates of the Caribbean’ films and ‘The Lord of the Rings’ trilogy; he was working on ‘The Hobbit’ films when he finally died aged 89. What an amazing career!

Best of all, however, was that Bob Anderson was not only the fight arranger for the original ‘Star Wars’ film, but actually wore the black costume and performed Darth Vader’s thrilling lightsabre fight scenes in ‘The Empire Strikes Back’ and ‘Return of the Jedi’, despite not being the credited actor (that was the bodybuilder, Dave Prowse), nor providing the voice (that was the actor, James Earl Jones). It took three people to play Darth Vader at any one time and Bob was one of them! It is great to know that this school has some connection with my favourite movie character and you can learn more about Bob Anderson in the Heritage Centre.

The final reason why I am focussing on Darth Vader today is that his character’s life is all about choices. For much of his life, Darth Vader makes some very poor choices! The prequels – something of a low point in Star Wars filmography – chart the early life of young Anakin Skywalker, a slave-boy on Tatooine in episode 1, ‘The Phantom Menace’ . In episode 2, ‘Attack of the Clones’, Anakin is now a Jedi apprentice, but already struggling with the brutal murder of his mother, his forbidden love for Padmé Amidala and the tough rules and discipline of the Jedi Order. Episode 3, ‘Revenge of the Sith’, sees Anakin tricked by the Sith Master, Darth Sidious, who pretends to have his best interests at heart. As a result, Anakin finally makes the worst of all choices: he betrays all that is good, destroys the Jedi Order and rejects his now-wife, Padmé, who – unbeknown to Anakin – gives birth to twins before she dies. Then, crippled by burning lava and by his duel with his former teacher and mentor, Obi-Wan Kenobi, Anakin only narrowly escapes death by being encased in a life-preserving black armoured suit and respiratory mask and helmet. He is barely Anakin any more, but rather a Dark Lord known as Darth Vader. It is hard to see how he can change now that he serves Darth Sidious who has dissolved the Galactic Republic and become the ruler of an evil empire.

The original trilogy – episodes 4, 5 and 6 – sees Darth Vader seeking to crush the rebellion against the Empire, but over time, he first learns that the rebels are led by his son, Luke, and then comes to realise that Princess Leia is, in fact, his daughter. Both are strong in the Force and the Emperor needs Darth Vader to turn them to the dark side or destroy them before they can defeat him. Despite first doing what the Emperor demands, Darth Vader gradually wavers from his evil path and, finally, he saves his son, Luke – who had refrained from killing him at the Emperor’s treacherous urging – by destroying Darth Sidious, but being mortally wounded in the process. Luke’s love for his father and his unwavering belief in his possible redemption finally leads to Darth Vader making the right choice, even though he has to reject power and die in the process. But he dies without his helmet on, looking into the eyes of his son and knowing that Luke has saved him from the terrible path he had previously chosen.

It is a great cinematic story and it fits with so many tales of choice and redemption throughout history. So what can we learn from Darth Vader? In short, life is entirely about the choices you make. What sort of person do you want to be? What influence do you want to have? But it is more than that. The Star Wars central story of Anakin Skywalker/Darth Vader teaches us that it is never too late to make a difference, to change, even when it will cost you all you have: your reputation or even the life you like to lead. We should remember that choosing to do the right thing can be incredibly tough, especially if you are not in the habit of making sensible choices, but it is the choice to do so that makes us human.

So then: try to make the wise choices here in school and in your life and, if you don’t always get it right, it is never too late to change those choices. Finally. . .”May the Force be with you”.