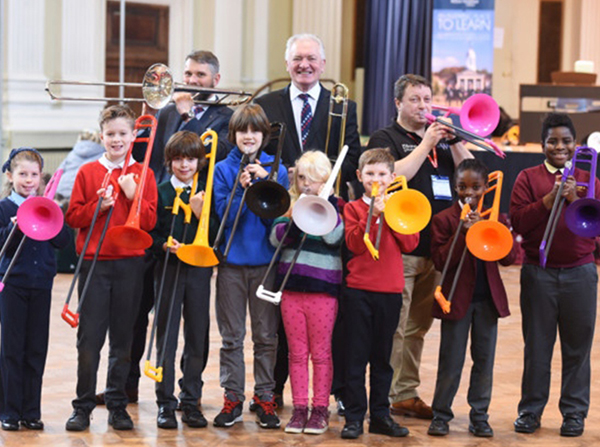 The Royal Hospital School held their inaugural Blast Off! day on Monday 6 February, introducing over 150 local primary school children to the wonderful world of brass and percussion playing.

Born out of concern that certain instruments are facing extinction, and building on the now well-established ‘Sing Up! Suffolk’ event, the day was designed to offer huge amounts of fun whilst delivering key educational opportunities such as improvisation and experimenting with different types of musical styles and genres.

A real coup for the school was involving Mr Gordon Campbell as the event’s leader. As principal trombonist of the BBC Big Band, Gordon is widely regarded as one of the leading trombone players in the country, and has performed with legends such Ella Fitzgerald, Tony Bennett, Ray Charles, Shirley Bassey and Robbie Williams. Gordon said: “After performing to a sell-out crowd here last February with the BBC Big Band, I was struck by the enthusiasm of the music department, so when they asked to head this project, I jumped at the chance. Playing the trombone has given me a lifetime of pleasure, so I’d love to be able to pass that on to the next generation of players.”

Following a day of workshops and interactive activities, the children capped the day off with a performance of two pieces of music they had learnt for their parents. Using the revolutionary plastic pBuzz and pBone, this mini-concert was a multi-coloured celebration of brass and percussion playing - one the school hopes to repeat in the future.