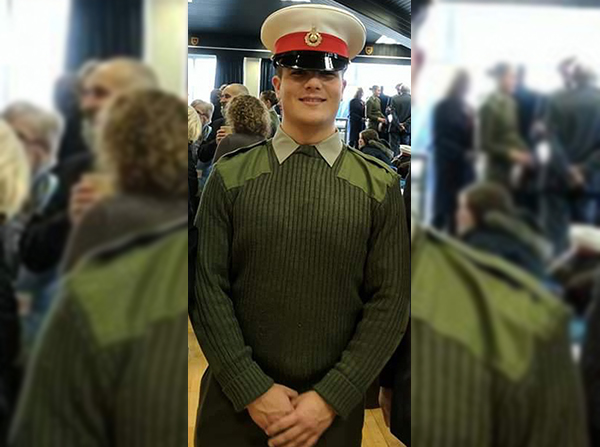 Last Thursday former RHS pupil Daniel Waterman passed out of Phase 1 training at the Commando Training Centre, in Lympstone, Devon. Daniel left RHS last July, and was one of the stalwarts of the school bands and choir, dedicating much of his free time to playing cornet and singing in the various ensembles.

After a well-deserved summer break, Daniel took the daunting train journey down to Lympstone, where he joined thirty other recruits for a gruelling twelve-week military course. During this initial period, the fledgling ‘bandies’ had to put their musical aspirations on hold whilst they were trained and drilled in a wide range of military skills such as field-craft, weapons handling and the arduous Initial Military Fitness programme. This aspect of the course, which includes rope climbs, timed runs, assault courses and exercises to improve upper body strength invariably claims a few victims, but Daniel performed extremely well and completed the course with flying colours.

The Bandmaster at RHS, Mr Richard Harvey, also a former Royal Marines musician, said: “Daniel really would have had every aspect of his character tested to the limit, both mentally and physically. He’s done extremely well to complete the course, and I’m sure his time at RHS would have played a considerable part in preparing him for the challenges he faced. He now has a life of adventure and opportunity ahead of him, and coming from RHS, he will be no stranger to that!”

After a brief weekend of respite with his family to reflect on his achievements, Daniel commences his musical training next week, under the watchful eye of the Band Service’s instructors and civilian professors.

The Royal Hospital School has a strong connection with the Royal Marines Band Service, and there are currently six former pupils serving in this elite musical organisation, including WO1 Simon Tripp. Simon now holds the prestigious appointment of Corps Bandmaster, but prior to joining in 1988 he was the proud recipient of the Silver Flute – one of the highest musical accolades that can be bestowed upon an RHS pupil.