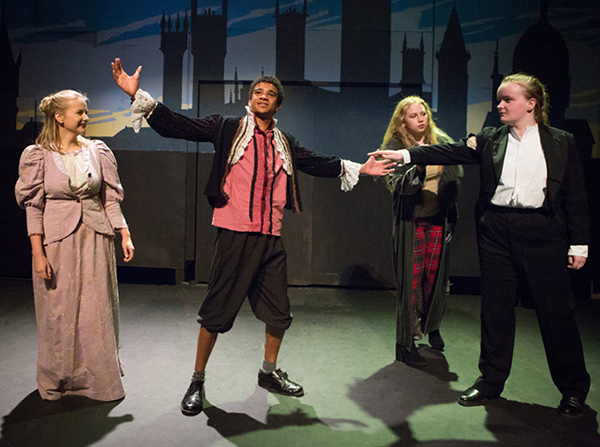 Where do we begin? With the ‘covetous old sinner’ whom we all know to be Ebenezer Scrooge, of course. Scrooge was played most convincingly by Lily L, with all of her “Bahs” and her “Humbugs” right on cue to stop the jubilant clerks (played by Alice K, Hannah F, Esmé F, Serena B, Sam D, Oli H and Sam C) in their resplendent tracks. And how could the rhythmic incantations of those clerks whenever the clocks chimed go without special mentions? As the plot progresses, we see characters such as Fred, portrayed ecstatically by Amadi G, and two gentleman played by Kai H and Rosemary B come into Scrooge’s office to spread the Christmas spirit. Despite their attempts being in vain, it allowed Lily L to show how – worryingly – convincingly she could adopt the distasteful character that was given to her in her first play at the school.

Moving on to the ghosts. The first ghost to appear to us was the ghost of Jacob Marley, another role performed by Sam D. Sam proved himself to be a versatile actor in this production, moving from playing the clerk frightened by Scrooge to playing a ghost frightening Scrooge, and when confronted by the wailing phantoms, I think it is safe to say that he was able to frighten all of us. Moving on to the ghost of Christmas Past, portrayed to us by the glitter obsessed Emilie E. Emilie gave us all a real insight into Scrooge’s past, and evoked emotions in not only Scrooge himself, but also the audience when we realised that he had once been a young, kind boy, played by Rowland K. She then takes us on to see the Christmas party hosted by the Fezziwigs (Brandon H and Grace H), and attended by Scrooge as a young apprentice and Dick Wilkins (Dan F). This scene again reminds us of how happy Scrooge once was, and was excellently carried out by all actors involved. In a sudden turn of events, we once again see how well Lily L was able to portray Scrooge, as she viciously smothers the ghost with her own pillow.

After this shock, we moved on to the very shouty Imi P, playing the ghost of Christmas Present who took us to see the Cratchit family. Mrs Cratchit was played by Sacha R, who sang the opening verse to ‘Once in Royal David’s City’ without fault. The Cratchit children, all eagerly awaiting their festive foodstuffs, were then introduced one by one, starting with Belinda (Molly I), then Peter (another of Oli H’s roles), Martha (another of Rosemary B’s roles) and finally Tiny Tim entered with Bob Cratchit (played by the adorable Lorca DB and Sam C respectively). Again, these fine actors appealed to our emotions when they were revealed to be so poor as to only be able to afford a thimble sized pudding.

Finally, we move on to the ghost of Christmas Yet to Come. In arguably Scrooge’s most pitiful time, the audience once again finds itself being saddened. This sadness is especially highlighted when Xanthe J (Scrooge’s maid), Lotty G (an avaricious old hag) and Dan F met on stage to discuss Scrooge’s demise and how much his possessions would sell for. In the graveyard, we see Lily’s excellent performance of pure fear when she realises that everybody had been happy about her character’s death.

The final scenes consist of Scrooge after his epiphany, and his newfound kindness towards all people. Everybody’s shock at this was excellently portrayed, especially by the clerks, and in particular Sam C’s Bob Cratchit.

Special mentions must go to Lily L for mastering this very wordy role, and for performing in front of the entire school over three nights having only been at this school since the beginning of term. Special thanks also to Mr Kerr for masterminding the whole production, and thanks to all involved for making it what it was. Nothing more remains to be said really, except for “God bless us – every one!”