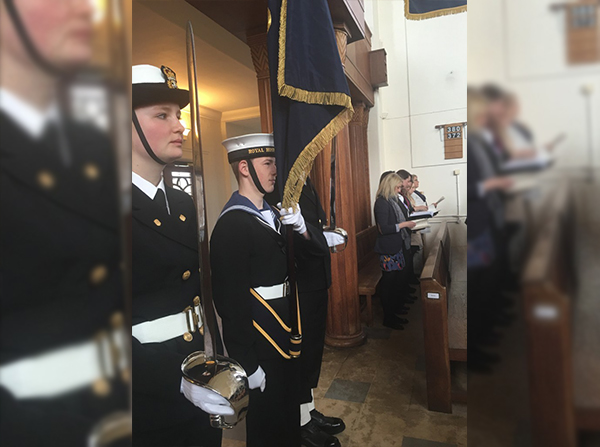 300 years of royal patronage marked on the Queen's birthday

Today is the Queen's birthday. She has, in fact, unlike any of us, two birthdays! Her real birthday is on 21st April, but she also has an official one on a Saturday in June in the hope of good weather for a state occasion, something that one cannot always rely on in April!

However, today is her real birthday. Her Majesty The Queen is 90 today, born on 21st April 1926. She is the Head of State and Sovereign of the UK, Canada, Australia and New Zealand, as well as Queen of 12 other countries, such as Jamaica and Barbados. She is also Head of the Commonwealth: an inter-governmental organisation of 53 independent states, most of which were once part of the British Empire. She is the longest reigning British monarch, having acceded to the throne on 6th February 1952 at the age of just 25. She has been Queen and Head of State for over 64 years, for all my life and for the life of every single person in this chapel today. The Chaplain has told you a fair bit about the devotion to duty and the humanity of this special lady, someone whom I am very fortunate to have met. But that's another story!

Elizabeth II also has a strong connection with this royal school, as have all the 11 monarchs who have gone before her since the founding of RHS in 1712. Indeed the Queen reviewed the whole school drawn up in divisions in 1994 to mark the 300th anniversary of the founding of Greenwich Hospital, our parent charity. The Royal Hospital School, as its name suggests, has many royal connections, but one of the most obvious is the Queen's Banner which is paraded at Divisions at least four times a year: on Remembrance Sunday, Founders' Day (next week), Sports Day and Speech Day.

The school is unique in having its own royal banner which you can see here. Sometimes they are called standards or guidons or banners, but the collective name is a colour. Colours are the flags of regiments and no other school in the country has a proper colour presented by the sovereign. In fact, in 2018 we will have had a royal banner for 100 years. It was first presented by King George V, our current Queen's grandfather, in 1918 as a mark of appreciation of the service given to the Royal Navy by the pupils of this school, not least in the First World War and, particularly, at the Battle of Jutland of which you will hear more about this term in its centenary year. We know that over 1,000 former RHS pupils served on ships at the Battle of Jutland and at least 101 died in that battle: it could well be more, but many records are lost. That battle which lasted from 31st May to 1st June 1916 was the greatest naval engagement of the Great War; RHS lost more pupils in one 24-hour period than any other British school in one day before or since. It was truly a banner hard won and the banner is a visible reminder to us all of this school's historic service to the nation and to its sovereign.

Until 1992, the great honour of carrying the banner on parade at Divisions was competed for fiercely, initially by the school's companies (as that was how the school was organised until the 1930s) and then by its houses in a similar way that today the houses compete for the Bannerman Trophy for smartness and bearing. Hawke was the last house to earn the privilege of carrying the banner at Divisions as, since 1992, the carrying of the banner has been under the direction of the Chief Petty Officers or Chiefs, RHS naval slang for our School Prefects. Henry Bezant in Year 10, who shares his birthday with HM The Queen, is the first pupil below the sixth form to carry the banner since 1992. At the end of each year on Speech Day, it is physically transferred in this chapel from one of the outgoing Heads of School to one of the incoming Heads of School. It always ceremoniously escorted, as now, by Guard Commanders carrying naval cutlasses.

By 1968, this banner was somewhat worn and tattered after 50 years of continual use. HM The Queen asked her mother, Elizabeth, The Queen Mother, to present a new banner to RHS on her behalf, which she did on Speech Day that year. The original King's Banner was then laid up and is in a display case in reception. Take a look when you next go past. The first Queen's Banner was used until 2006 when it was replaced by the current Queen's Banner and the former banner laid up in chapel where it hangs today as you can see. On this occasion, it was rededicated on behalf of HM The Queen and it was presented on parade to the then Deputy Head of School, a certain Thomas Wood, now Housemaster of Cornwallis! He doesn't seem to have changed that much in 10 years. . .

The ceremonial Queen's Banner should not be confused with the school flag which is raised and lowered each working day at RHS as we have all just done this morning. This flag is known officially as a defaced blue ensign. This is a naval blue ensign with a badge added to make it unique, in our case with the arms of Greenwich Hospital. RHS is the only school in the country to be allowed such a flag, so we are doubly unique with our ensign and our banner. HM The Queen allowed the Admiralty to grant us the privilege of the ensign in 1953 as another reward for service.

History has many instances of British soldiers dying courageously in battle in their attempts to prevent colours from falling into the hands of enemies as such colours have always been the personal gift of the monarch. Soldiers have known that it is a privilege to carry them. We are fortunate to have that privilege awarded as a reward for the service of the Royal Hospital School. I hope that as we celebrate HM The Queen's 90th birthday and her many years of faithful service, we dedicate ourselves at this school and in our future lives to continue that proud tradition of service which is marked by the school flag and by the Queen's Banner.

Let us walk in the footsteps of the generations of boys and girls who have gone before us; they have left proud footprints for us to follow.

In closing, as we all celebrate the life of Elizabeth our Queen, I am proud to say: Long may she rule over us. Happy Birthday, Maam.